Up & Down the Escalators 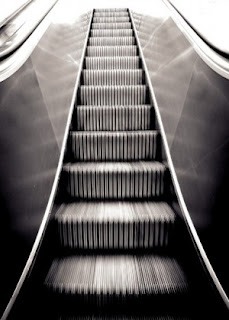 What a day! It started out early this morning, when Deputy Dante Tavolaro and I testified in support of D090, a resolution that Dante got in just before the deadline last week. It calls upon the Episcopal Church to adapt its various forms, paper and electronic, to be inclusive of people with various gender identities. All too often, people who identify as neither male nor female (which numerous people within the trans community do), or who might use more than one term to articulate their 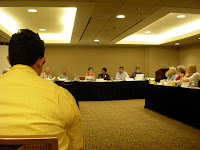 gender, encounter forms that turn them away just as surely as a closed door. As part of his testimony, Dante told a story of a recent difficult experience filling out a form in a church body (which I hope he might post here). I emphasized that while I have encountered forms that attempt to include transgender people by having three options—male, female, and transgender—the option of simply giving a space for someone to write in their gender, along with their name and preferred pronouns is preferable. The committee asked thoughtful 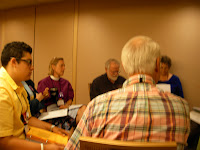 questions, and the subcommittee was very receptive, even sharpening the language slightly to push the church more. The final version was:

Resolved, the House of Deputies concurring, that this 76th General Convention of the Episcopal Church recommends and encourages all bodies of the Episcopal Church to utilize all available resources to revise and adapt forms to be fully inclusive of all people: by including lines not only for one's legal name, but also for one's preferred name as well as one's gender identity and pronoun preference. 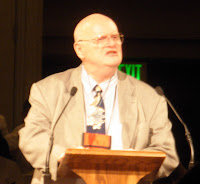 The subcommittee then took up resolution D032, submitted by Dr. Louie Crew, on refusing to discriminate against lay church employees on the basis of "race, color, sex, national origin, age, familial status, disability, sexual orientation, or gender identity." The subcommittee supported it and added "gender expression."

When both of these resolutions went to the full committee, they were unanimously voted to go to the House of Deputies. So at that point, the count of trans related resolutions stood as follows:

There were two others that had been left behind in the committee on World Mission: C001 (which basically duplicated #1) and C046 which added the same language as C061 to Title II.1.3. 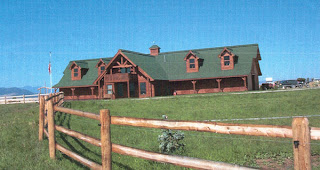 Meanwhile, back at the ranch, the House of Deputies yesterday approved D025, a long, nuanced resolution that would move the Episcopal Church Beyond B033, and sent it to the House of Bishops. I sat in on the House of Deputies during their morning session, however, because there was a possibility that C061 (which would add "gender identity or expression" to the ministry canon) might come to the floor. As it turned out, that didn't happen. After lunch, I returned to the HoD for the same reason. But halfway through the session, I learned that the House of Bishops was beginning to debate C025. So I made my way up the two long escalators to the third floor of the Anaheim Conference Center, where the House of Bishops is stationed. I arrived amid a steadily increasing crowd, and parked myself amid the Integrity contingent. Michelle Hansen was already there, though I couldn't see her for all the people. Donna Cartwright, meanwhile, was keeping an eye on the House of Deputies below.

And because the Episcopal Church Women were holding their triennial meeting in the room next door, snippets of cheerful song occasionally wafted through the walls with oddly appropriate incongruity.

You can find out more about the debate in the House of Bishops here and here. The closer it got to 5pm, the more likely it seemed that the day would come to a close without the Bishops bringing the matter to a vote. Debate was still going strong, well after 5pm, when I got word that at the last moment the House of Deputies had indeed taken up C061, the ministry canon resolution.

I busted out of the House of Bishops, nearly running over a stately ECW delegate, and headed to the escalators. There was no way I was going to miss this debate. 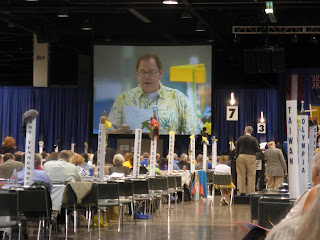 By the time I got into the HoD, Michael Barlow had just begun eloquently testifying in favor of the resolution. What I had missed was an introduction to the resolution by Gay Jennings, the chair of the World Mission committee, which had included a reading of a definition sheet that had been prepared for us by Lisa Mottet of the National Gay and Lesbian Task Force.

I sat down and listened, my heart in my throat, as Michael Barlowe finished and Dante Tavolaro began. What an 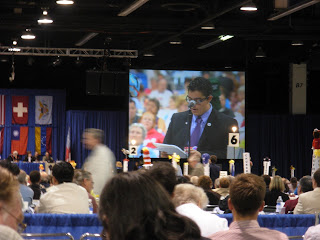 incredibly proud moment it was to hear Dante speaking as an openly trans deputy. Heck, how amazing was it to even hear the word "transgender" spoken on the floor of the House of Deputies. I had run into someone from the diocese of Massachusetts earlier in the day, and when I told her that a trans-themed resolution had never come up before, she was genuinely surprised. Dante's testimony will be posted here in the coming days, but suffice it to say that he spoke of what a beacon of hope the Episcopal Church could be if it explicitly included transgender people the sentiment famously expressed by Presiding Bishop Edmund Browning that "there will be no outcasts in this church." 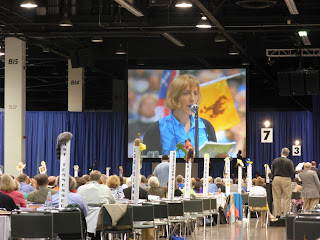 Sarah Lawton then told a beautiful, poignant story of her sister, who is a transgender woman. I cannot express how moving this was, and I sincerely hope Sarah will let us post her testimony on the blog as well.

After Sarah finished, someone asked Gay Jennings to re-read the definition of "gender expression". He was apparently uncomfortable with this concept, namely the expression of one's inner gender identity which, come to think of it, is not unlike the definition of a sacrament: "an outward and visible sign of an inward and spiritual grace"... He then moved an amendment to strike the words "gender expression" from the resolution. In the debate about this amendment, Rev. Christopher Hoffer from the diocese of Long Island spoke. He spoke against the amendment and for the resolution itself, and very strongly at that.

The amendment was then soundly defeated.

About this time, a current of people started flowing into the HoD. Had I heard, an Integrity comrade asked? The House of Bishops had voted in favor of D025 (the amended text of the D025 after the House of Bishops finished with it is ">here)! The Spirit felt like it was seriously blowing in the Anaheim Conference Center.

At this point, the Deputies were turning to vote on the resolution. They voted by orders in their deputations, which are made up of equal numbers of clergy and laity. A so-called "divided vote" in which there are equal numbers for and against, counts as a "no" vote. Otherwise the majority wins within each deputation.

Then we had to wait. Earlier today, and in previous days, the electronic voting machines have had technology problems, causing frustrating delays. While we waited, the Secretary of the Connvention made several announcements.

.....And then the session was adjourned without us finding out the results! They should be announced first thing in the morning session, which starts at 9:30 a.m.

So tomorrow (Tuesday) should prove to be quite a day. In addition to learning these results, the HoD should take up D012, the Transgender Civil Rights resolution, not to mention D025 (the huge Beyond B033 resolution). And if C061 has passed, it should be sent to the House of Bishops. Before it can become the mind of the Convention, it must pass both houses.

But I have to say from this exhausted but exhilarated perch at 3 a.m., it's been an amazing day. I'm so grateful for the witness of the Deputies who spoke in favor of the resolution, for the support of Michael Barlowe and Ian Douglas within the World Mission Committee, for the open hearts of those committee members who heard our testimony last week, and for the positive feedback we've been getting around Convention. Blessings abound.

CP
Posted by Cameron Partridge at 4:14 AM