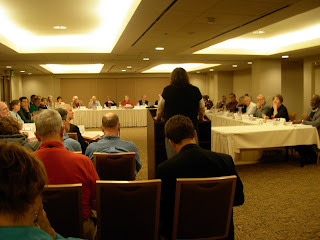 I had the opportunity to lend my voice in testimony at two recent legislative committee hearings at the General Convention in Anaheim.

On the evening of 7/8 I stood before the World Mission Committee and voiced my thoughts on the addition of standard non discrimination language in the ordination canons. I will try to reproduce what I said.

Good evening. I am a priest of the Diocese of Milwaukee ordained for 23 years. I am also a transwoman and began dealing with my issues of gender roughly 20 years ago. I speak in favor of resolution C0001.

I could say the addition of these words are a matter of justice, which they are. I could say these words are standard "boiler plate" non discrimnation language used frequently by enlightened corporate entities across this country. I could even legitimately say the addition of these words to the Canons are "the Gospel". But I am not going to say any of these things, except in passing. I would rather place a more personal face on this issue.

As I worked through the challenging gift of being differently gendered and accepting myself as such, I grew in a personal sense of wholeness. As I grew in that personal sense of wholeness, I became more confirmed in my call to priesthood. What's more, my excercise of that call grew in both depth and fullness. I give thanks for the difficult challenge of coming to a place of peace with my differently gendered self and the strengthening of my sense of priestly vocation that resulted from the work I did. 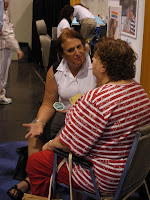 I would urge the addoption of this language for all the reasons noted above so that the people who follow me into the ordained ministry of this Church do not have any undue barriers in their journey to wholeness of person and the excercise of their ministries in this part of Christ's Body.

The Rev G Green
Posted by Cameron Partridge at 11:42 PM