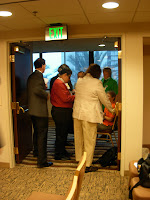 It’s nine a.m. in Anaheim— do you know where your TransEpiscopal representatives are? Most are at Denny’s, enjoying a well-earned breakfast after testifying before the committee on National and International Concerns in favor of two resolutions on transgender civil rights. This was our second round of testimony in twelve hours, and we’re tired! But, as with last night, our testimony appears to have been well received.

This time we had even more people testify—seven—and once again no one testified against the resolutions.

One difference between last night’s experience and this morning’s is that people on this committee appeared to be somewhat more familiar with transgender issues. More than one committee member knew of specific instances of anti-trans hate crimes; a Deputy from Colorado was aware of the Angie Zappata murder, for instance. I distributed the same list of terms that we shared with the World Mission committee last night, however, and it seemed to be helpful. 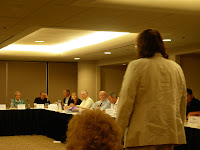 This morning, in addition to all those who testified last night, Donna Cartwright weighed in. Her long history and expertise in the history of the movement for trans equality, as well as its links to the legal gains made by previous movements, helped her respond to some technical questions asked by the committee, which is populated by several lawyers.

Michelle Hansen spoke of her experience of discrimination in a secular job. Vicki Gray spoke of people she has met on the streets in the Night Ministry that she does in San Francisco, as well as her experience at the funeral for Gwen Araujo in Newark, California. Jim Toy again spoke of how we all are impacted by what he terms “the rules of gender,” rigid gender norms that get imposed on us from the moment we make our way into this world. Tom Fehr spoke again of his friend who is a transwoman, and how she was subject to discrimination in her secular job. Dee Tavolaro shared stories of enduring hate-based violence. Gari Green shared how she has sought to avoid discrimination in her secular job by continuing to work as male; although Wisconsin was the first to prohibit discrimination on the basis of sexual orientation in 1982, it still does not have similar laws for transgender people. 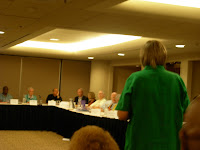 Nor yet does Massachusetts. I told the story of how the International Transgender Day of Remembrance (TDOR) started because of the murder of Rita Hester in 1998 around the corner from my congregation, St. Luke’s and St. Margaret’s (aka “SLAM”), and how last year, for the first time, the planning committee for the TDOR asked SLAM to host it. I conveyed how powerful it was to me to help host this event, and to see the church packed with people who have been so alienated by communities of faith over the years.

I went on to say that right now in Massachusetts, a bill that would add “gender identity and expression” to the state’s non-discrimination laws; on July 14th there will be a hearing at the Massachusetts State House on this bill. And I shared that when I spoke at a rally in favor of this proposed legislation and said that the Diocese of 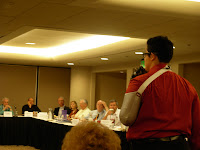 Massachusetts had voted at its diocesan convention to support it, people broke out into applause. I expressed how this applause had taken me by surprise—I certainly imagined that it would be meaningful for people in the trans community to know of this support, but I didn’t anticipate the sense of emotional impact. And so what has really come home for me is what an impact we can have, not only potentially on public debate and in legislative deliberation, but on the hearts of trans people who come to know that we truly care and are willing to stand up and make our caring count.

After the hearing, we were approached by several committee members and other visitors who expressed how much they appreciated our testimony. One was Louie Crew, who has done so much for social justice concerns in the Episcopal Church over the years, not least by founding Integrity in 1974. Another was Marc Andrus, the bishop of the diocese of California, who interviewed me for his video blog. 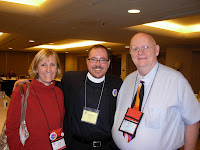 Now the committee needs to deliberate on these resolutions, along with the numerous others under their care. We hope and expect that they will send them to the House of Deputies so that they have a chance for debate and passage there. In the meantime, we are listening in on these open deliberations, ready to be of help if questions should arise along the way.