Cameron has posted well on the day's events at General Convention. I will only add a few observations from my perspective. I was in the House of Bishops waiting for C061 to come up. C061 which deals with inclusiveness in the ordination process had passed in the House of Deputies. I was sitting with a long-time friend who is the wife of one of the Bishops (they had both been parishioners of mine many years ago and I consider them good friends.) The Bishops were struggling with the issue of blessings of same sex unions because six states, including my own Connecticut allow same sex Civil Marriages (D056). Cameron texted me from Deputies that D025 (see Cameron's explanation in previous posts) had passed in the Deputies. My friend and I both were extremely pleased(the Bishops had passed this measure yesterday.)

The Bishops decided to postpone the discussion on Marriage Blessings to Thursday Afternoon, which will be later today, and moved on with business. I was totally surprised to hear D090 on gender issues on forms presented. It passed with little dissent without discussion. D032 Gender equality for Lay employees was then presented by the same committee. Bishop Wolf of Rhode Island expressed confusion about the term Gender Expression. Bishop Andrus of California tried to explain as did the Bishop who presented the measure. The explanations were a bit weak. The attempt was apparently enough because there was no more debate and the measure passed! Both measures passed easily. I was totally surprised and pleased. What a day! Look to Cameron's post for the wording of the measures and for details. 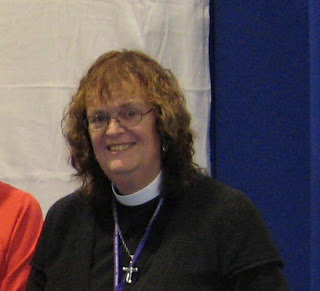 As a personal note, I am getting tired. I get up a bit later each morning and go to bed a little earlier each night. Tylenol and Advil are my friends. Sitting in Convention Hall chairs is getting tougher. The morning shower gets a little longer and hotter each day. For me it is two more days and then I fly home. It has been a remarkable time. I have noticed that all of the pictures of me that have been posted are of the back of my head. I am not sure why that is(possibly it's the best view of me), but I thought I would post one of my front for a change.
God's Peace,
Michelle+
Posted by Shelly at 10:46 AM