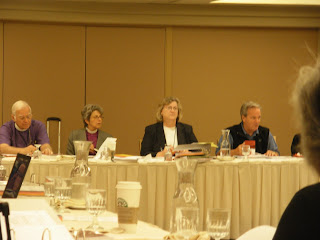 Tomorrow marks the official start of the General Convention, but already legislative committees are holding meetings to sift through the resolutions allotted to them. This year there is an unprecedented five resolutions on transgender inclusion and equality. We had thought there would be four, but we just learned of a fifth.

These resolutions have been allotted to the Committee on World Mission, where they might have been overshadowed by a slew of resolutions addressing “B033”, an infamous resolution passed in 2006. But this evening the committee separated these two resolutions from the B033 pack and they will now be considered in a hearing tomorrow (Wednesday) evening between 7-9pm.

An additional three resolutions call on the Episcopal Church to include “gender identity and expression” in its ministry nondiscrimination canon:

These resolutions are currently under the care of the Committee on National and International Affairs. Today we learned that they will be considered at a hearing Thursday morning from 7-9 a.m.

That means that there will be two hearings on transgender matters within twelve hours.

At the last General Convention three years ago, there was one transgender themed resolution. There was a hearing on it, at which TransEpiscopal's Donna Cartwright testified. Ultimately the resolution got tabled, which means it died.
One person, one resolution. 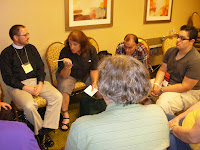 But this year: five resolutions (thus far), eight TransEpiscopal members. Three of us flew in on the 4th of July, and this evening we arrived at our full compliment. Another huge difference this year is the amazing support we of TransEpiscopal have around us, from the volunteers of Integrity (for which three of us are also official volunteers), to Deputies who are actively working with us from within committees and deputations. One deputy in particular has already been amazing: Sarah Lawton of the Diocese of California. Another is Dee Tavolaro of Rhode Island, who is, as far as we know, the first out transgender Deputy in the history of the Episcopal Church. Go Dee! 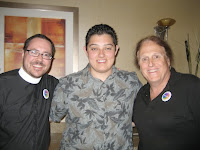 Last night, Dee, Gari Green of Wisconsin, and I co-led a trans 101 type workshop last night for the folks working toward LGBT inclusion here at Convention, and it went really well.


Meanwhile, Gari and Jim Toy have also been meeting people at the booth that Integrity is sharing with us in the Convention's exhibit hall. 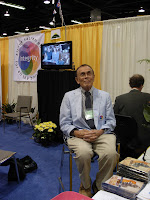 So here we are, just before everything begins, and already so much has happened. I'm incredibly grateful to be here and while we don’t know what lies ahead, and we know the road may yet get very hard, I just have to say right now: what a difference three years makes.

CP
Posted by Cameron Partridge at 3:57 AM