A Letter from The Consultation

The following is a letter written on September 24th by the Consultation, a coalition of justice organizations in the Episcopal Church, to the House of Bishops as they deliberated on their statement. Two of us from TransEpiscopal participated in the Newark meeting and, while the letter has been posted on several other blogs and websites for the last couple of days, we post it here as a sign of a process in which we were proud to take part. Even as we struggle in these difficult days in the Anglican Communion, this kind of collaboration gives us hope.

Associated Parishes for Liturgy and Mission


A message from The Consultation to the House of Bishops as it deliberates its message to the Church.

Any message you make must be mindful of the fact that the Executive Council has made a very clear statement on the matter before you and that General Convention will not speak on this matter until its meeting in 2009.

We have in mind the language of the Baptismal Covenant which calls us to respect the dignity of every human being. It is not respectful of our lesbian, gay, bisexual and transgender sisters and brothers when we tell them that they are full participants in the church and then place restrictions on their participation at any level of the churchâ€™s life.

In the preamble of the 2006 platform of The Consultation we affirm that we see the image of God and the Christ in others and ourselves. We believe that all the baptized are called to share in the governance and mission of the Church at all levels. We see the increase of power claimed by the episcopate as imbalance in The Body.

We urge you to have these things in the forefront of your minds and hearts, as you craft this statement. The sacred vows of The Baptismal Covenant and the tradition and heritage of the participatory governance of The Episcopal Church must not be squandered for a single Lambeth conference.

We urge you as bishops not to walk apart from the rest of the priesthood of all believers in The Episcopal Church, and to embrace the unconditional love of God as made incarnate in the radical inclusion of Jesus Christ. May the Holy Spirit be with you to guide you in all strength and courage in these difficult days as ordained leaders in The Church.
Posted by Cameron Partridge at 4:15 PM No comments:

Last night the House of Bishops released a statement of where they are as a body. In part the statement responds to the Communiqué issued by Anglican Communion Primates in Dar Es Salaam, Tanzania last February. The media and the Anglican Blososphere are weighing in on it left and right. What I would add for now are two observations and one critical comment:

It’s striking to observe the range of reactions among progressives (e.g. see comments to posting on Fr. Jake’s blog). Some people are incensed, while others think this was a decent outcome that clarifies what the next steps need to be. Integrity USA, the organization of LGBT Episcopalians, has issued a quite positive statement, saying that the bishops stood firm, resisting the demands of the Anglican Primates. I have also observed question marks about Integrity’s statement from some progressive corners, a sense of ‘are we reading the same document?’ There can be no doubt that the primary work of the next General Convention, which will be held in Anaheim, California in the summer of 2009, is to repeal the resolution known as B033 (which stated “that this Convention therefore call upon Standing Committees and bishops with jurisdiction to exercise restraint by not consenting to the consecration of any candidate to the episcopate whose manner of life presents a challenge to the wider church and will lead to further strains on communion”). Yesterday's bishops statement points to the language from that resolution as ‘where the church is’ right now. It also stated that the immortally ridiculous phrase, “those whose manner of life presents a challenge to the wider church”, includes gay and lesbian people. 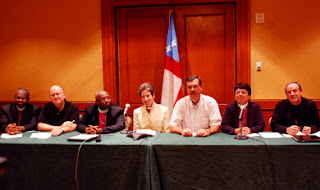 of several conversations recently about what angles on this story the media may be missing. The aspect about which I hear most is the notion that this split within the Episcopal Church is not happening on nearly as big a scale as the media seems to think it is. This morning, Michael Paulson of the Boston Globe remarked, “The Episcopal Church has repeatedly sought to portray the conservatives who would leave as a tiny minority.” He doesn’t come right out and say he doesn’t buy it, but he does make it clear he detects spin. I don’t think he’s mistaken, but I also agree that the numbers aren’t nearly as high as conservative groups spin them to appear. Nevertheless, the global dimension of our conflict may ultimately make the congregational numbers game irrelevant; the story itself is impacting infinitely more people than we can count, in and out of the Anglican Communion, for good and/or ill. We can’t just count those who are leaving the denomination. There’s a fascinating communications war going on in all of this. If, as I believe, the media does not simply report on but also constructs its subjects/objects, then the entity known as the ‘Anglican Communion’ is now inflected by the increasingly global concept of homosexuality, and—fascinatingly, to me-- vice versa. How often now, when reading about homosexuality in Global South contexts, do we find some reference to the Anglican Communion? It’s incredible.

The bishops made a distinction between “authorizing” same sex blessings and “making allowance” for them for pastoral reasons. Translation: no diocese has written or officially authorized any liturgies for the blessing of same sex unions, but in many places services have long been allowed to take place. A resolution from the 2003 General Convention even acknowledged that reality. Yesterday’s statement says that most bishops are not making such “allowances”. But where they are doing so, they do it for reasons of “pastoral care.” By the end of their statement the bishops affirm the need to respect the dignity of LGBT people, speaking in terms of our civil rights.

What we’re seeing here is an affirmation that the church is willing to fight for full inclusion outside the church, but that within the church that same fight can only take place under the rubric of “pastoral care.” Indeed, Bishop Caroline Tanner Irish of the Diocese of Utah commented, “’I think putting [same-gender blessings] in the context of 'pastoral care' is the critical word,’ she said. She praised the House of Bishops for what she called the hard work and compromise offered by all the members.” It’s a sad day when the very term “pastoral” takes on a patronizing and pathologizing hue, but that’s exactly what’s happened. The pastoral gets to respond compassionately to disorder. As long as LGBTI people remain officially relegated to the ‘pastoral’, we remain contained, and a worship service that should be a sacramental vehicle of transformation ends up implicitly framed (by bishops, not necessarily by the priests who conduct them) as a kind of pat-pat, there-there, I’m-praying-for-you-in-all-of-your-challenges kind of way. To add insult to injury, there are those who are speaking of the need to make limits to the pastoral. Great. Well, I’m not interested in waging this fight on pastoral grounds. I’m fighting for the full flourishing of human beings, called by God to ever-increasing authenticity, ever more true and clear reflection of the likeness of that image in which we were created.

We’ve got our work cut out for us in the 2009 General Convention. And when I’m not utterly frustrated, I’ll be curious to see how the communications construction process evolves along the way.

CP
Posted by Cameron Partridge at 1:34 PM No comments:

This has been a day of tremendous tension in the Anglican Communion. Our House of Bishops are finishing up a six day meeting in New Orleans at the beginning of which they received a visit from Rowan Williams, the Archbishop of Canterbury. The bishops and the Episcopal Church in general are under enormous international pressure to bow to demands that we unambiguously stop blessing same sex unions and lifting up openly gay people as bishops. The media has been reporting on our denomination to an unprecedented degree because of the intense fear of schism. Everyone Episcopalian I talk to is exasperated by the situation. I too get irritated, particularly regarding coverage of our governance as a denomination. Admittedly, it’s a confusing system with elements of hierarchy and democracy. The most important factor in the present circumstances is that in the Episcopal church bishops don’t actually have authority to declare a national church policy on their own. We include all orders of ministry—bishops, priests, deacons, and baptized laity-- in that sort of decision, and we meet in a kind of congress every three years to do so. In between such meetings the highest level of authority in the Episcopal Church is actually the Executive Council which, again, is composed of all orders, not just bishops. In other parts of the Anglican Communion, governance structure can bestow more authority on bishops than we do. What’s frustrating is when other parts of the Communion expect our bishops to operate as theirs do. I imagine those kinds of expectations can be seductive to our bishops, especially those who instinctively a) want to reign in a chaotic situation and b) keep everyone happy. A situation like this requires strong spines and level heads. Thankfully, this past Spring, our bishops made a clear statement resisting what others would have them take on. As the pressure continues, I pray they’ll do that again.

Meanwhile, the U.S. Congress gets closer to passage of the Matthew Shepherd Act, legislation that would enable the Justice Department to support the investigation of crimes based on hatred of particular groups, including gay and transgender people. A version of this bill has passed the House of Representatives and now looks as though it will come up for a vote tomorrow in the Senate. I called my senators this afternoon to tell them I support it. This morning I noted a Boston Globe op ed by Cornel West and Sylvia Rhue that calls to task clergy who have been claiming that this bill would infringe on religious freedom in any way. It won’t.

As it so happens, late last week it came out that Marvin Nissin, a man serving a life sentence for his role in the 1993 murder of Brandon Teena, as well as Phillip DeVine and Lisa Lambert, now claims that he, not his accomplice John Lotter, did the killings. The case of John Lotter, who is on death row, may now be reopened. Brandon Teena, who inspired the film Boys Don’t Cry, was murdered when his female birth sex was discovered. That kind of discovery also catalyzed the murder of Gwen Araujo in Newark, 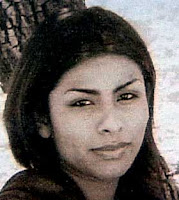 California ten years later and numerous similar murders have happened between and since. It is for precisely these kinds of cases that this federal legislation was written.

And so on this day, as Anglicans—especially LGBTI ones—look for affirmation of our denomination’s polity and direction, and as LGBTI people of the U.S. await federal protection of our basic human dignity, I pray for an end to the fear on which division and hatred is based.