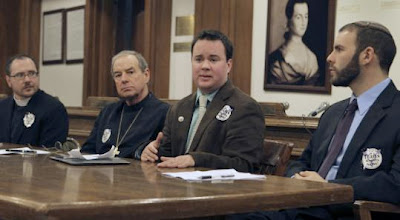 Cross-posted from the Walking With Integrity blog:

Yesterday I participated in a press conference at the Massachusetts State House in which religious leaders called for the passage of "An Act Relative to Transgender Equal Rights," a bill that would add "gender identity and expression" to existing nondiscrimination legislation in Massachusetts. For the past three years this bill has failed to make it out of committee, despite a great deal of support in the legislature and from the governor. The main speakers at the press conference were the Right Reverend M. Thomas Shaw, SSJE, the Bishop of the Episcopal Diocese of Massachusetts; Sean Delmore, an openly transgender man who is the Assistant Minister at College Avenue United Methodist Church (Somerville) and a member of Cambridge Welcoming Ministries, and a candidate for the diaconate in the United Methodist Church; and Rabbi Joseph Berman of Temple B’nai Israel in Revere, MA. The press conference was part of a weeklong effort, dubbed by the Interfaith Coalition for Transgender Equality and the Massachusetts Transgender Political Coalition as "Transgender Faith Action Week," a week in which congregations from various religious traditions are calling for transgender equality.

An article by Lisa Wangsness about yesterday's press conference was on the front page of the Metro Section in this morning's Boston Globe, and is pasted below (the above photo by David L. Ryan was taken from it). This article comes on the heels of last week's Guardian article by Becky Garrison, which featured interviews with a number of transgender clergy in the United States and the United Kingdom. In the UK, as Rev. Dr. Christina Beardsley has explained in a series of blog posts for Changing Attitude, the week of March 21st featured seven short video interviews by 4thought.tv on Channel 4 (unfortunately not available for viewing outside the UK) at the intersection of transgender and religious identities. Garrison's article pointed back toward the UK video series and forward toward Trans Faith Action Week, here in Massachusetts.

Bishop M. Thomas Shaw of the Episcopal Diocese of Massachusetts and several other clergy yesterday called on Massachusetts lawmakers to pass transgender-rights legislation and asked religious communities to throw their support behind the bill.

Shaw said that virtually all transgender people have experienced discrimination or harassment and about one-quarter have been fired from their jobs.

“Supporting this legislation, and supporting transgender people in the life of the church and in secular society really has to do with the living out of my baptismal covenant,’’ he said.

The bill would prohibit discrimination in Massachusetts against transgender people in employment, housing, public accommodations, education, and credit, and would expand the hate- crimes statute. Thirteen states and more than 130 cities nationwide have passed similar legislation.

A majority of lawmakers in both the House and Senate cosponsored the bill last year, but it never came up for a vote. Representative Carl M. Sciortino Jr. of Medford, a lead sponsor, said the political climate changed dramatically after Scott Brown won the special election for US Senate in January 2010.

“The level of willingness to take up controversial votes diminished after that,’’ Sciortino said.

The issue became particularly charged a year ago, when Republican gubernatorial nominee Charles Baker derided the legislation as “the bathroom bill,’’ a term opponents use to reflect their belief that it would give sex offenders greater access to children in public bathrooms by effectively making the facilities unisex. Supporters of the bill say that is not true: People would still have to use bathrooms that match the gender they present.

Kris Mineau of the Massachusetts Family Institute, which opposes the bill, said yesterday that his organization remains concerned about “the privacy, safety, and modesty of all citizens.’’ He said there is no need to broaden the state’s nondiscrimination and hate-crimes statutes.

He noted that the number of sponsors had declined markedly this year — from 81 to 52 in the House and from 23 to 16 in the Senate, according to the website of the Massachusetts Transgender Political Coalition.

Gunner Scott, the coalition’s executive director, said 35 former cosponsors either did not run again or were not reelected. Supporters of the legislation are talking to freshmen and hope to find additional support, he said, adding that the bill still has more cosponsors than about 95 percent of other bills.

Representative Byron Rushing, another lead sponsor, said religious groups supporting gay rights showed their political strength in 2007 when they helped defeat a proposed ban on gay marriage. “I think what religious groups offer is their theological perspective on justice . . . but it’s also very important that we hear from those denominations that have begun to end discrimination against transgender people within their own denomination,’’ he said.

Other religious groups, including the Massachusetts Conference of Catholic Bishops, fought against the gay marriage bill in 2007. The bishops also opposed the transgender legislation last year.

About 135 clergy are publicly supporting the bill this year, according to the Interfaith Coalition for Transgender Equality. The coalition this week is asking congregations to work for its passage. Appearing with Shaw yesterday were the Rev. Cameron Partridge, a transgender man who is interim Episcopal chaplain at Harvard; Rabbi Joseph Berman of Temple B’nai Israel in Revere; and Sean Delmore, a transgender man who is assistant minister at the College Avenue United Methodist Church in Somerville.

Shaw acknowledged that it might be tougher to rally as large a coalition for transgender rights as for gay marriage, if only because relatively few heterosexual people know someone who is transgender.

Getting to know transgender people personally, he said, has “taken me deeper into my own faith life and proved to me once again that unless everyone has equality . . . nobody is really free.’’

Trans clergy are finally gaining greater acceptance
As we approach Transgender Faith Action Week, progress can be seen in attitudes to trans people within the church

Last week, the Rev Dr Christina Beardsley, vice-chair of Changing Attitude, a network of lesbian, gay, bisexual, transgender and heterosexual members of the Church of England, was one of the voices featured on 4Thought.tv's week of short films featuring trans people and faith.

While the US Episcopal church developed a maverick reputation within the Anglican communion for blessing same sex marriages and ordaining gay and lesbian clergy, the House of Bishops of the General Synod of the Church of England's report Some Issues in Human Sexuality, issued in 2003, contained a chapter titled "Transsexualism". Currently, one can find about a half dozen trans clergy in the UK and US. These numbers are imprecise, as some clergy do not wish to go public beyond the scope of their individual parish or diocese – a concern that's understandable given that the trans community seldom receives even the legal protections afforded gays and lesbians .

Beardsley, who was ordained for 23 years prior to her transition in 2001, observes that "some within the Church of England feel the issue of trans clergy has been settled" by citing such cases as the Rev Carol Stone and the Rev Sarah Jones. However, she says: "Not all trans clergy have been supported by their bishop, as these two priests were, and some have been excluded from full-time ministry because of Church of England opt-outs from UK equality legislation."

During the 2008 Lambeth conference, a decennial gathering of Anglican bishops, Beardsley organised a panel titled "Listening to Trans People". While only four bishops attended this gathering, it represented the highest number of bishops to participate in an Inclusive Network to date. Also, this panel helped consolidate Changing Attitude's networking with Sibyls, a UK-based Christian spirituality group for trans people, and the US-based online community TransEpsicopal.

The Rev Dr Cameron Partridge, interim Episcopal chaplain and lecturer at Harvard University, served on this panel as the sole US representative. He transitioned in 2002 during his ordination process and has been an instrumental player in guiding the passage of four resolutions supporting trans rights during the US Episcopal church's 2009 general convention.

The Rev Vicki Gray, a Vietnam vet before her transition, and currently a deacon with an emphasis on ministry to the homeless, noted that their goals at general convention were to assert that we exist as flesh-and-blood human beings, to demonstrate that we are here in the church as decent and devout followers of Jesus Christ, and to begin the process of education and dialogue that will lead to full inclusion in the life of the church, not only of the transgendered but of other sexual minorities such as the inter-sexed (known to some as hermaphrodites).

Following the murder of trans rocker Rita Hester in Allston, Massachusetts, in 1998, a vigil held in her honour became the impetus behind the International Transgender Day of Remembrance, an annual event held on 20 November. Even though this day to reflect and remember those who have been killed by anti-transgender hatred or prejudice is not a religious service, in 2010 memorial services were held for the first time at Episcopal cathedrals in Boston and Sacramento.

The Rev Christopher Fike, vicar of Christ Episcopal Church in Sommerville, Massachusetts, who transitioned in 2003 after having served in a fairly high-profile position as a female cleric, believes that moving this memorial to the cathedral signifies that the church views this as a justice issue. He says: "The more we normalise people who are outside the typical in their gender expression, the more room there is for that range of expression. We no longer have to hide our real identity from the church."

The Rt Rev M Thomas Shaw, SSJE, Bishop of Massachusetts, admits that ordaining and providing pastoral oversight to trans clergy proved to be a life-changing experience for him. Initially, he struggled with the idea and the reality of having trans clergy until he saw they were doing the same ministry as everyone else.

From 3-10 April, Transgender Faith Action Week will be held in the Boston area in the hope of bringing forth faith leaders from different traditions to increase awareness of the trans community in religious circles. Partridge, one of the organisers, says: "We call upon the church to consider carefully its vision of theological anthropology, its theological vision of the human person. How does gender factor into our conception of the human?" After all, in Genesis 1:26, God created ha-adam, a nonsexual term that means "human being". Then, after he created humanity, she declared that it all was "very good".
Posted by Cameron Partridge at 2:01 PM No comments: