Advent Approaches in the Episcopal Church 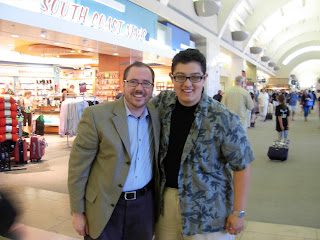 I’m on the plane heading back to Boston. It’s a quiet ride but for the man who just woke me up with his loud guffaws at Monsters vs. Aliens, but no matter. I haven’t had this much time to be quiet or really think in a number of days. My brain is full. I ran into Dante Tavolaro in the airport, looking for lunch, and as we waited in line for the most expensive McDonalds burger I’ve ever eaten, he exclaimed, “I am so tired of the letters LGBT. Right now I don’t want to hear a combination of letters remotely close to them-- BLT, you name it.” The woman in front of him secretly smirked. Later, at my gate, I overheard a woman behind me (and, I assume, on this flight) telling someone on the phone, “I can’t even think about going to church on Sunday!” Yep, we’re all tired—LGBT-ed/churched (even ubuntu-ed) out. But I have to say, my exhaustion is happy.

I don’t know how people away from the Convention have perceived it, but from where I sit, I feel like the Episcopal Church just turned a major corner. I feel an overwhelming sense of relief. For so long, questions and conflicts over a combination of gender and sexuality, refracted in confusing ways through our colonial legacy, have paralyzed us as a denomination. B033, the resolution that three years ago essentially imposed a moratorium on the consecration of LGBT people to the Episcopate, has now been superceded. And while it will take the actual election, consent and consecration of an openly LGB and/or T person as a bishop to complete the ending of that moratorium, to concretely embody our forward movement as a church, to my mind and those I have conversed with these last few days, we have prepared the way for that to happen. We are ready. It’s as though as a Church, we have been stuck in the latter part of the liturgical year, the days leading up to Advent when the readings assigned in the lectionary are peppered with weeping and gnashing of teeth. And now we are approaching the threshold of Advent. I am so ready for the fulfillment of that hope.

For those of you who have been following the bigger LGBT picture at this Convention, you will also know that in addition to D025, which supports an inclusive ordination processes for ALL orders of ministry, we passed C056, which officially moves us forward on blessing the marriages, domestic partnerships and civil unions of same sex couples. The short story on this matter is that in dioceses around the country we have been doing such blessings for years. It’s the official sanctioning of that work, and the official designing or gathering of such services on which the Church has been stalled. Now, with C056, we are finally beginning to move forward on this practice as a whole Church.

And obviously, if you have been following this blog, by now you know that at this Convention we made stunning progress on 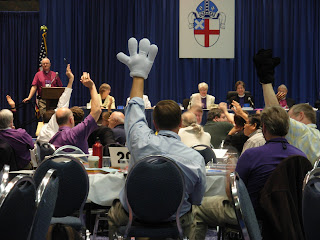 transgender issues. As we look back on the work of this Convention, I think it will be important to see this progress in the larger context of the forward movement via D025 and C056. But I also think our progress was part of the spirit of openness and relationality, and indeed of intentional, focused storytelling that were themes of this Convention (not to mention humor, as several bishops displayed during their session Friday). The spirit of the indaba groups that were featured at last summer’s Lambeth Conference also feels connected to this trend. People were careful not to demonize one another in their disagreements. People attended to one another’s humanity. Those of us who testified on the transgender related resolutions benefited from and, I hope and believe, contributed to that spirit.

And that is as it should be. That kind of attentiveness to one another’s humanity is at the heart of the Baptismal Covenant of the Episcopal Church, which asks, “will you seek and serve Christ in all persons, loving your neighbor as yourself?” and “will you strive for justice and peace and respect the dignity of every human being?” The answer to these questions may seem easy, but sometimes they are not — which is why the response given in the Book of Common Prayer is “I will, with God’s help.” This Christian life we are about is a spiritual discipline that we all pledge to take up upon entry into this beloved community. And I know in my very gut that when we live into that discipline, when we do, with God’s help, we grow. Advent approaches indeed.

CP
Posted by Cameron Partridge at 10:36 AM