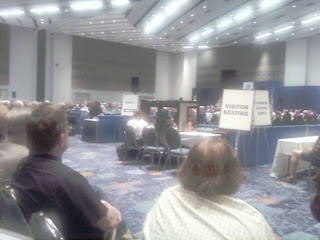 Yesterday, for the first time in its history, the House of Bishops publicly took up the matter of transgender people in ministry in the Episcopal Church. Resolution C061, which passed the House of Deputies on Monday, July 13th by a wide margin, seeks to change Title III.1.2 which currently forbids discrimination on the basis of the following categories: “race, color, ethnic origin, national origin, sex, marital status, sexual orientation, disabilities or age, except as otherwise provided by these Canons.” The resolution would add “gender identity or expression” to that list. The outcome of this debate reflected a diversity of opinion on and experience with transgender people in the House of Bishops. Several bishops spoke in support of the resolution, a couple spoke strongly against it, and a number referred to feeling inadequately educated on the topic.

The resolution, as they initially received it was a follows:

Resolved, the House of _______ concurring, That Title III, Canon 1, Sec. 2 of the Canons of the Episcopal Church is hereby amended to read as follows: all baptized persons shall have full access to the discernment process for any ministry, lay or ordained in this church, except as otherwise provided by these canons. No person shall be denied access or have their discernment process terminated because of race, color, ethnic origin, national origin, sex, marital status, sexual orientation, gender identity or expression, disabilities or age, except as otherwise provided by these Canons. No right to licensing, ordination, or election is hereby established.

Marc Andrus of the Diocese of California and Gene Robinson of New Hampshire spoke both passionately and authentically about their experience of transgender people in ministry. Bishop Andrus emphasized that in his diocese, where Vicki Gray serves as a vocational deacon, they ordain individuals, not particular classes of people. If someone discerns a call to ministry, the issue for a Commission on Ministry and bishops to attend to is the vocation and the person’s ability to live into it, not their particular gender identity or expression. I entered the room during the tail end of Gene Robinson’s remarks, and so missed the bulk of them, but I heard him speaking strongly in support.

Of those who spoke against, Bishop Duncan Gray of Mississippi stood out for remarking that adding this language would “cross a line” and that we don’t need it because people are ordaining trans people already without it; to make that reality canonically explicit would be to “wave a red flag” about it.

For the most part, among those who spoke against the resolution, what I heard was not so much outright negativity as a sense of discomfort, of feeling overwhelmed and inadequately informed. A couple bishops argued that Commissions on Ministry need to have access to resources in order to be prepared to receive applications to the ordination process from trans people, and that to change the canon now, before they had such resources, would not be fair.

Bishop Dorsey Henderson of the diocese of Upper South Carolina objected to the longstanding language of the canon “no person shall be denied access”. He expressed a wish that the word “all” might replace “no.”

Bishop Howard of the Diocese of Florida expressed confusion and concern about the term “gender expression,” wondering if it might be a trojan horse for sexual activity outside of marriage. This was not the first time someone took issue with this term; someone on the floor of the House of Deputies also asked about it, and it also came up in the Committee on World Mission.

Bishop Dabney Smith of Southwest Florida then objected to a line that the Committee on World Mission had actually added to the original version of the resolution. The nondiscrimination canon already states that “no person shall be denied access,” but this resolution added the phrase “or have their ordination process terminated.” Had it remained, this line might have been a remarkable achievement in its own right. It would have addressed scenarios in which people come out as LGB or T, or begin a relationship, after entering their ordination process; in a some more conservative dioceses, people’s processes have indeed been terminated in response to just such situations. But the bishops were not in favor of that phrase. Stated reasons ranged from exactly the one just mentioned to concerns about opening themselves to litigation if, for instance, someone attributed the reason for their termination to a particular bias while the bishop or Commission on Ministry might have actually had other reasons.

The bishops then unanimously voted to remove that phrase.

Bishop Catherine Roskam of New York then returned to Bishop Henderson’s critique of the “no person” language. “What is it about ‘all’ that we don’t understand?” she asked. “There’s no adequate list. There will always be someone’s name we’ve left off.” With that, she made an amendment to remove all of lines five and six of the resolution. That motion spoke not simply to the language of “gender identity or expression,” but also to the entire list already enshrined: race, color, ethnic origin, national origin, sex, marital status, sexual orientation, disabilities or age. The move on Bishop Roskam’s part appeared designed to find a way out of an impasse, a way not to reject the resolution outright.

In the wake of this move, Bishop Michael Curry of North Carolina made a motion to refer the resolution to the Standing Commission on Ministry Development, so that a study could be done on ordaining transgender people. Notable in his motion was the sentiment, “This is important. It is important. And it’s of such importance that we want to do this properly, we want to do this in the right way. And in order to do so we need to come back with a good, thoughtful report.”

Comments and questions that followed either supported this referral or asked whether it would cause the original resolution to die. A vote was then taken on Bishop Curry’s motion, and was very narrowly defeated: 60 in favor, 66 against.

They then immediately turned to Bishop Roskam’s amendment, passing it, and the resolution as amended:

Resolved, the House of _______ concurring, That Title III, Canon 1, Sec. 2 of the Canons of the Episcopal Church is hereby amended to read as follows: all baptized persons shall have full access to the discernment process for any ministry, lay or ordained in this church, except as otherwise provided by these canons. No right to licensing, ordination, or election is hereby established.

Because they amended the resolution, it gets sent back to the House of Deputies.

So, where does this resolution leave us? While I believe the amendment to remove the specific demographic language was well intentioned, and while I certainly concur with the notion that “all” should truly mean all, this resolution as amended does not do what it was designed to do. The “all” version appears to have passed specifically because it did not mention “gender identity or expression.” Further, it eradicates the particularity of groups that worked for years to get that language into the canon to begin with. As much as I wanted the universality of “all” to do the job, in the context of this debate as it unfolded, the term was more evasive than inclusive. And so my hope is that the House of Deputies will not concur with it, that we might put our shoulders to this particular wheel again at the 77th General Convention.

But I have much higher hopes than that. The progress we have made at this Convention-- with more to come before it's over-- is absolutely huge. The fact that the House of Deputies passed C061 by a very respectable margin is tremendous. That the House of Bishops got to discuss this resolution, was huge. They made it clear they want to learn more, which is also to me a major victory. I will admit, however, that it was also difficult, indeed painful, to hear the debate as it unfolded. This is my life, my ordination process, my ministry they were talking about. And yet at the same time, in my mind, I keep coming back to Bishop Curry saying “This is important. This is important.” I agree-- it is important, and because of that, we need to do more. We have taken some of the first steps in making the Episcopal Church and Anglican Communion aware that trans people are here, in our pews, on our vestries, in our pulpits; that we bring unique insights, gifts of uncommon experience and perception, and often deeply prayerful experiences of transformation; that we love this church.

And while I’ll end this post here, as Michelle and Donna have noted, more trans related activity happened yesterday than just this vote—in the afternoon the House of Deputies took up D012, the transgender civil rights resolution, and passed it in a landslide after several truly beautiful speakers gave testimony. I want to give that story a blog post in its own right, so stay tuned.

CP
Posted by Cameron Partridge at 11:42 AM