One Down, One to Go 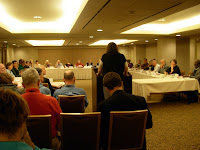 What a day! This evening six of us testified before the Committee on World Mission in favor of the three resolutions that would add "gender identity and expression" to the ministry nondiscrimination canon of the Episcopal Church. Five of us spoke in favor of Resolution C001, which originated from Newark, and I spoke in favor of C061, which came from my home diocese of Massachusetts.

The hearing began at 7:45 p.m., and included testimony on another resolution on the support for foreign missionaries, a subject about which the Committee was more accustomed to hearing.

Meanwhile, yesterday I learned that the committee needed a glossary of basic terminology related to trans issues. So late last night I put one together-- a very basic trans 101 type document, a half page long, with terms like "biological sex", "gender identity", "gender expression" and the difference between these concepts and "sexual orientation." That distinction, it seems, was the one that people in this group most needed to think about. The committee got the document early in the day and had it before them during our testimony. 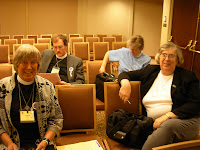 I couldn't help but feel for them; this group was so not accustomed to thinking about such matters-- not even those related to sexual orientation, and they are dealing with a deluge of such resolutions. Our three resolutions seem tiny compared to the sixteen or so that seek to repeal or move beyond the infamous "B033" which was passed at the last minute of the 2006 General Convention. That resolution called on the Episcopal Church to refrain from consecrating any bishops "whose manner of life presents a challenge to the wider church." In other words, don't lift up any more Gene Robinsons, so as not to offend others in the Anglican Communion. But, as far as I can tell, the feeling of the Convention this year-- particularly among the lay and clerical members of the House of Deputies (akin to the U.S. House of Representatives) is to move forward in the basically progressive direction the Episcopal Church is headed, and move beyond the language of B033. This committee, World Missions, appears to have been given the B033 related resolutions, as well as ours, in order to place these matters in the context of the Anglican Communion. There are so many resolutions on this topic, that they are holding a huge hearing on them tomorrow night. 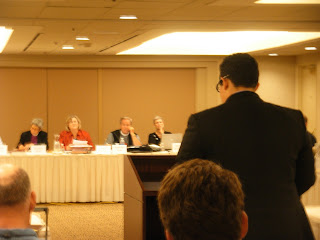 So that's part of the context in which our hearing this evening took place. We met prior to the hearing and then walked over as a group. We arrived early to sign up and then waited. Slowly, more people filled the room, though it was not completely full. The committee sat in a U shape, with a podium at its head for testifying. All of us who testified will hopefully be sharing that testimony here (and on individual blogs, for those who have them) in the days to come, but in the meantime, I will try to convey the gist of their remarks. Michelle Hansen, who blogged the piece before this one, spoke first about her thirty-eight years as an Episcopal priest, who transitioned several years ago from male to female. Dee Tavolaro (whose testimony is here) then spoke about the resolution, putting it in the context of the five points of mission, about which the Deputies had reflected in their afternoon legislative session. Vicki Gray, a deacon and transwoman from the diocese of California, spoke about the Baptismal Covenant and how all are empowered by their baptism into ministries of all sorts. After Vicki, Gari Green, a priest from the diocese of Milwaukee, spoke about her years of ministry and how being a transwoman has helped her in to be a better priest. Then Tom Fehr, an Integrity volunteer, spoke about a friend of his who is a transwoman, and how she should be able to be known and respected for the fruits of her work and ministry, regardless of her trans identity and history. All six of these speakers testified in favor of C001. Jim Toy of the Diocese of Michigan, a strong ally and member of TransEpiscopal, spoke of how rigid gender norms restrict all of us, regardless of whether we identify as transgender Nevertheless, he continued, trans people are particularly vulnerable to discrimination and violence. After each speaker, the committee had a chance to ask any questions, but they never did. As the co-chair of the committee kept asking for questions, and as she was met with silence, I couldn't help but get the sense that the group was overwhelmed, just trying to take us in. Finally the co-chair, the Rev. Gay Jennings of the DIocese of Ohio, said she herself had a general question which any of us could choose to answer, namely whether we knew of any trans person who had had a difficult time specifically because the canon does not currently mention "gender identity and expression."

There was a pause. I then got up and shared that I knew of people who came out as transgender after their ordinations and who had been asked to leave their ministerial positions for that reason. In terms of the ordination process itself, I said that while it was difficult to show definitively how many might have been ordained but for that canon, I do know from many conversations I have had over the last several years that there are a number of trans people out there who experience a sense of call to ordained ministry but who are afraid they will not be fairly considered simply because they are trans. Rev. Jennings seemed to find the answer satisfactory. She then invited me to give my testimony for C061. 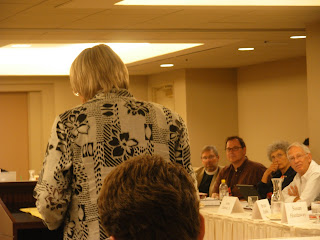 I explained that I feel fortunate to be able to work with my bishops, the Commission on Ministry and the Standing Committee of my diocese while I was in the ordination process, since I came out as a transman prior to my ordination. I also shared how helpful it has been to me to be in conversation and community with other trans Episcopalians and Anglicans, including lay and ordained people both in the United States and the Church of England. I made certain to say that, since I had the sense that some committee members may have wondered if this resolution could be construed as an instance of the American church charging ahead of the Anglican Communion again. The C of E is not the whole Communion, obviously, but it is significant to note that they have had transgender priests since at least 2000. I went on to note that in my priesthood, one of the most significant facets of being transgender is that people can know that much more clearly that whoever they are, they are welcome in this church. That when we say all, we mean all. They don't have to be transgender themselves for it to be a big deal that a transgender person could be a priest in this church. I concluded by saying that I really did hope that people would feel free to ask questions.

And then a few people did. Bishop Geralyn Wolf of Rhode Island asked me to define "gender identity and expression" again, as she had heard more than one definition over the course of the testimony. Deputy Michael Barlowe of the diocese of California invited me to share again how sexual orientation is different from gender identity and expression. There may have been one or two other questions; I can't remember at the moment.

After me, a man from the diocese of Michigan, whom I do not know, testified in favor of C046. He basically said that no one should be barred from access to the ordination process because of their gender. When asked how he thought the resolution related to B033, he said that the resolution impacts all the orders of ministry, not just lay people, deacons and priests; if called, anyone should be able to become a bishop.

No one testified against any of the resolutions.

At that, the hearing ended, and the committee began deliberating on other resolutions. We gathered for a quick debrief in preparation for tomorrow: our next hearing is tomorrow morning at 7 a.m. This early morning stuff is killing me. But it's certainly for a good cause! So in the world of trans committee hearings at General Convention, one down, one to go. Then we'll hope these resolutions get to the floor of the House of Deputies; they deserve a fair shot.

CP
Posted by Cameron Partridge at 3:25 AM