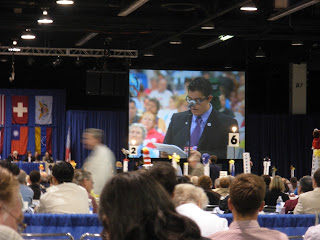 After our first effort at GC legislative advocacy in 2006 (described here) we realized that we needed to bring a team. We also experienced the power of working in coalition. In 2007 we had become members of the Consultation, “a collaboration of progressive organizations within the Episcopal Church that partner to work for social justice.” Even as we attended GC with our own focus, we also collaborated with the nine other member groups of the Consultation. The key to TransEpiscopal’s work lay not in lifting up any one particular voice or having any one specific spokesperson, but rather in operating collectively and intersectionally. We chose to work this way out of respect for the varied experiences and identities within our own communities and in recognition that we are not alone in being impacted by oppressive social structures. Thus far we have emphasized collegiality, respect, shared resources, variously offered gifts and talents, and collective determination. TransEpiscopal has never had a president, has never had elected positions. Perhaps someday a different structure will make more sense for us. Perhaps not. 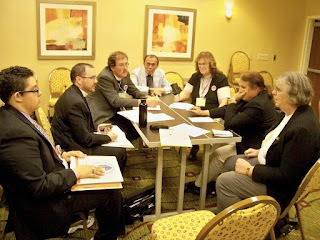 Coming into the 76th General Convention in Anaheim, we were expecting four transgender-themed resolutions amid a much greater number related to liturgical blessings for same sex couples and overturning the (ambiguous) moratorium on openly gay bishops. Some of our targeted resolutions sought to put the Episcopal Church on record in support of secular transgender nondiscrimination legislation, while others sought to amend our own canons in support of trans equality within TEC. Never before had a group of trans Episcopalians organized ourselves to testify at the committee hearings to where these resolutions had been directed. Never before had there been an openly trans Deputy to General Convention, which we gained in Dante Tavolaro of Rhode Island. With growing excitement, we made our way through Convention. To get a flavor for our energy, see this early blog post about the intense opening days of Convention or this one in which I raced up and down the escalators between the House of Bishops and Deputies meetings; this testimony from Dante Tavolaro from the floor of the House of Deputies; this progress report from Michelle Hansen; this recorded testimony from Gari Green or from Vicki Gray.

After all was said and done, the 2009 General Convention passed four trans-themed resolutions:

3)    D012 put TEC on record in support of fully trans inclusive nondiscrimination and hate crimes laws at the local, state and federal levels

4)    D032 declared that lay employees in TEC are not to be discriminated against on the basis of several demographic designations, including gender identity and expression.

There was one resolution that did not pass in 2009, or at least not in both Houses of the Convention. Resolution C061 sought to do what C030 had targeted in 2006: to add “gender identity and expression” to Canon III.1.2, prohibiting discrimination on this basis in access to the ordination process. While the 2006 attempt never made it out of Committee, this time it did. It was debated on the floor of the House of Deputies and was sent to theHouse of Bishops once it passed. Among the bishops, however, there was an attempt to eliminate all of the specific nondiscrimination language in the canon, substituting the word “all”. You can read about this turn of events here. The archival legislation history can be found here. 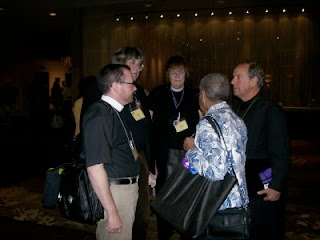 While we were disappointed at this outcome, we were determined to help bring this legislation back in 2012, in part because of how buoyed we were by all the progress made at this Convention—trans specific legislation as well as the overturning of B033 and the call for liturgical material to bless same sex couples.

We had come into the 2009 GC wondering “how our presence [would] be received,” particularly in “communications about the Convention,” and how “transgender people and concerns” might or might not be incorporated “into well-entrenched narratives about the debates of the Episcopal Church.”

We left Convention with then President of the House of Deputies Bonnie Anderson as well as Bishop J. Jon Bruno of Los Angeles speaking about trans people in the concluding press conference:

“Rt. Rev. Jon Bruno: Well, transgender people are part of the congregations in this diocese, and they’re part of the world community. And it’s a good thing that we’re dealing with this openly. We need to talk about the fact that humanity is different wherever you go, and that we are all called to be loved as children of God, and dealt with, with equity and love.

“Dr. Bonnie Anderson: Let me just add that in the House of Deputies we had testimony from transgender persons. It was very moving. It was very well received in the House of Deputies. I believe that it helped us to see and learn about that particular way of being. We welcomed that and did pass resolutions to include all people, including transgender persons.”

We had traveled a good deal from the illegible, barely traceable remnants of our legislative efforts in 2006. Working collaboratively and gathering new friends along the way, we had made unexpected, remarkable progress in 2009. None of this meant that there weren’t and aren’t still major gaps—gaps in which trans people continue to experience significant difficulty in the church and in the world. Stay tuned for more on both the further progress made in 2012 and gaps that remain to be engaged and transformed….

Thanks for one's marvelous posting! I genuinely enjoyed reading it, you're a great author.I will remember to bookmark your post and will eventually come back in the future. I want to encourage one to continue your great posts, have a nice afternoon! best in search

Great post. I was checking constantly this post and I am impressed! Very helpful information. I care for such information a lot. I was looking for this particular info for a very long time. Thank you and best of luck. moda dresses