General Convention 2012: Off and Running 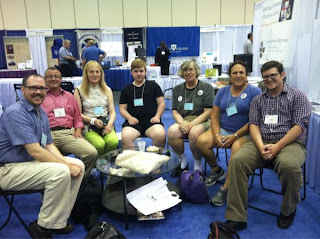 The TransEpiscopal team has hit the ground running here at The Episcopal Church’s 77th General Convention in steamy Indianapolis.  Most of us arrived on Monday, and yesterday was a day of joy and discovery, as many people who knew each other only online finally got to meet in person.  For the first time we have our own booth in the Convention exhibit hall, and over the last two days we have been meeting people from across the church in that space.  As in 2009, I am so struck by the sense of interconnection, and especially the unexpected ways that people from all across the church are connected specifically to trans people.

Yesterday I met a priest from a Midwestern diocese who had watched the documentary Out of the Box last Saturday evening.  She was moved to make a connection in her sermon between the gospel passage last Sunday and the idea of being and acting “out of the box.”  She talked about how our church would be looking at resolutions adding “gender identity and expression” to the church’s nondiscrimination canons here at General Convention.  Two parishioners then thanked her for her words and shared that each of them were parents of transgender people.  This was the second instance of a priest I know preaching about transgender equality this past Sunday.

The other one was a friend in Massachusetts where our state nondiscrimination law just went into effect on Sunday.  I was moved to see coverage of this law in a headline at the top of the Boston Globe metro section as I flew to Indianapolis Monday morning.  The sense of celebration and of momentum coming into General Convention has been powerful.

There are three resolutions that TransEpiscopal is supporting along with our coalition partners in IntegrityUSA, the Consultation, and the Chicago Consultation:

D002 “Affirming Access to the Discernment Process for Ministry”

This resolution would add “gender identity and expression” to Canon 3.1.2, the church’s nondiscrimination canon for access to the ordination process.  This addition would make explicit that ordained ministry is open to transgender people.

This resolution would add “gender identity and expression” to Canon 1.17.5, the church’s nondiscrimination canon for access of lay people to all levels of the life of the church.

This resolution calls for a church wide response to the epidemic of bullying, including those targeted because of their gender identity or gender expression. 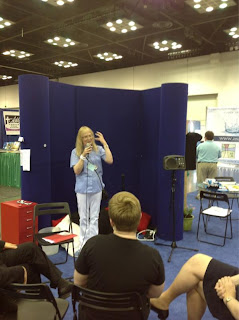 D002 and D019 were assigned to the Ministry Committee, and hearings on them will take place tomorrow at 2pm.  TransEpiscopal members and allies are preparing now to testify.  Once the hearings take place, the committee has to decide whether to send them along to one of the two Houses in The Episcopal Church’s bicameral system.  So stay tuned for more on that front, as well as the fate of D022, the resolution on bullying.

Meanwhile, today has been packed with hearings on various other numerous resolutions, including marriage equality, the impact of DOMA on couples with an immigrant member, and many, many more.
This afternoon, I was joined by Rev. Dr. Christina Beardsley (of Changing Attutude) at the Consultation’s Speaker’s Corner in the exhibit hall. We gave an overview of the trans-related resolutions before us, and the broader context for movement on trans equality in the Episcopal Church and Anglican Communion.  We emphasized that the last General Convention passed four transgender supportive resolutions, falling short only on C061, now called D002.  Tina also spoke about the longstanding presence of transgender clergy in the Church of England, as well as the collaborative work that has been taking place between various "LGB and T"(as she puts it) and allied groups. 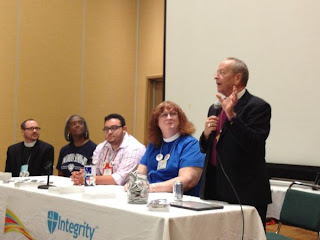 Between the end of the Speaker’s Corner and Integrity’s double feature of Out of the Box and Love Free Or Die, we learned that resolutions D002 and D019 were going to receive a joint hearing tomorrow at 2pm in the Ministry Committee.

With that knowledge, we came into the room packed for the double feature.  Out of the Box had begun when I scooted into a free row to grab a seat.  After sitting down I looked up and realized I was directly behind my bishop Tom Shaw who plays a prominent part in Love Free or Die.  He turned around and grinned at my comment in Out of the Box about my decision to transition feeling like Christmas morning.  I laughed out loud at the scene of him in the water fight.  Seeing each of us up on the big screen was a little surreal.  As Bishop Gene Robinson went on to say in the panel afterward, as difficult a time it is in the life of the church, it is also such an amazing, wondrous time.  What a privilege to be part of this holy work of transformation.

So now at the end of this second full day in Indianapolis, we prepare for our hearing tomorrow.  Please keep us all in your prayers, that minds would be clear and hearts be open.

Email ThisBlogThis!Share to TwitterShare to FacebookShare to Pinterest
Labels: Episcopal Church, General Convention, Love Free Or Die, ordination of transgender people, Voices of Witness Out of the Box