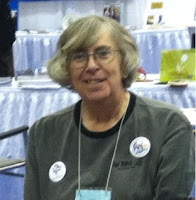 Following is testimony prepared by TE Co-Convenor Donna Cartwright, for hearing by Ministry Committee of GC 2012 on Resolutions D002 and D019. Testimony could not be delivered because too many witnesses had signed up for the available time.

For many trans people, religious experience includes a strong narrative of transformation and redemption. Indeed, some of us find our spirituality through our trans journeys. I will tell you one such story, my own.

As a child of the 1960's, I became involved several of the movements for social change of that time, particularly civil rights and anti-war. I marched, I picketed, I was arrested, I went to jail. Since then, advocacy for social justice has remained a central part of my life. But for most of my life, there was still something missing.

As a closeted trans person, I felt a lack of authenticity, a deep inner uncertainty, a detachment from myself, an emptiness at the core. I was guarded, moody, frequently depressed and withdrawn. And as an agnostic, I found it difficult to express or develop my spiritual feelings. There was a part of me that was hungry and was not fed.

When I came out as trans and lived into my true self, dissociation dropped away quickly and depression lessened greatly. My spiritual hunger intensified, and eventually I had to act on it. I needed reverence and ritual to mark out my journey, for which secular culture had left me ill-equipped.

I found what I needed, and much more, and the Episcopal Church of the Good Shepherd in Fort Lee, N.J., where I became a member, and eventually served as an usher, on vestry, and as deputy to diocesan convention. At last, my soul was fed.

By adopting these resolutions, the church will support trans people as we say, "Grant, Lord, that we may serve thee in newness of life."
Posted by Cameron Partridge at 12:01 PM