I’m almost at a loss for words.

Yesterday the House of Deputies—one of the two Houses in The Episcopal Church’s bicameral system of governance – passed resolutions D019 and D002.  The House of Bishops had done the same on Saturday afternoon.  Both resolutions add “gender identity and expression” to the Church’s nondiscrimination canons.  D019 addresses access of lay people to the life and governance of the church – so, for instance, it clarifies that transgender people can be Eucharistic ministers, vestry members, retreat attendees or leaders, etc.  D002 affirms that transgender people can be ordained leaders.  These resolutions addressed an already/not yet phenomenon:  already trans people are vestry members, Deputies to General Convention, Eucharistic ministers or Lectors; already, transgender people are priests and deacons in a handful of dioceses in this church.  But now we affirm and underscore that practice.  Transgender people are not just in Massachusetts, Washington State, and California.  We are, as the saying goes, everywhere.

We knew that the resolutions were on the Deputies’ calendar for the day, so a number of TransEpiscopal members listened in the gallery, once more on the edge of our seats.

As the House moved quickly down their calendar list, our resolutions quickly approached.  But just as D019 came up, a problem emerged.  A combination of factors had caused a delay in the Spanish translation of several complex resolutions.  As a result, the House would need to delay the vote until at least the afternoon session, maybe longer. 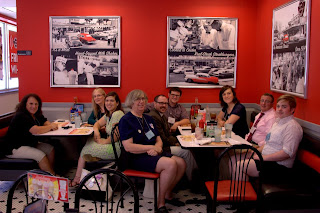 We adjourned to Steak n’ Shake.

After a raucous lunch (pressure release being a good and necessary thing) we said goodbye to Tina Beardsley who was flying back to the UK.  We very much miss her and so appreciated her warmth and wry humor—by the end of her stay, Tina and roommate Rev. Gari Green had practically developed a Midwest/UK vaudeville act. 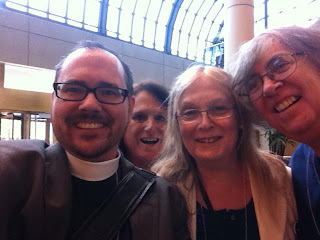 Back in the Deputies gallery, D019 quickly came to the floor.  Once more, backers were ready to roll.  We heard from Sarah Lawton of the Diocese of California, whose sister is trans.  We heard from Deputy Dante Tavolaro, transman from Rhode Island.  We heard from Rev. Carla Robinson, transwoman from the Diocese of Olympia.  From a bevy of young adults, including Sam Gould from the Diocese of Massachusetts, and Natalie Venatta of the Diocese of Kansas. A Deputy from Alaska spoke of trans people in his congregation.  There were innumerable allies, just as in the hearing before the Ministry Committee.  People from across the United States—all manner of regions, and not simply the coasts—stood up and spoke passionately in support.  There were some people opposed to the move, and they were more represented on the floor of the House than in the hearing, though still a clear minority.  As expected – and as happened in the House of Bishops in 2009 – they tried to amend the resolution to remove the specific language from the canon.  In support of this move, a Deputy from the Diocese of Albany ridiculed the growing list of protected categories, saying she felt slighted “as a red-head” for not being included despite being a minority of the population.  My mom and sister are both red heads.  I can only imagine how fiercely they would have responded to that comment.

In any case, the supportive Deputies were more than ready for the amendment, and it was soundly defeated.  A vote on the original resolution followed quickly, and at 3:15pm it passed by a landslide.  Debate had lasted for a half hour.

D002 came up directly afterward.  In many ways, as in the House of Bishops, the debate was a continuation of the previous one.  The amendment tactic having failed, however, it was not tried again.  Once more Deputies from all around the church, North and South, Midwest, East and West, got up and spoke in support.  Sarah Lawton of California spoke of her experience with trans clergy, saying we as a church will be “richly blessed” if we open our ordination process explicitly to trans people.  Carla Robinson spoke of the rigorous process she underwent for ordination in the Diocese of Olympia, even after having been ordained in the Lutheran Church, Missouri Synod.  She wanted to make the supportive atmosphere she experienced in that process more widely accessible.  Then a Deputy from Alabama in a plaid sport coat and bow tie (in honor of Gregory Straub, Secretary of the General Convention, who is known for his crazy sport coats) got up and began speaking.  At first I couldn’t tell if he would speak in favor or against.  But then he said that we are to make God’s kingdom present here on earth, and read from Isaiah 56:4-5:

For thus says the Lord:
To the eunuchs who keep my sabbaths,
who choose the things that please me
and hold fast my covenant,
I will give, in my house and within my walls,
a monument and a name
better than sons and daughters;
I will give them an everlasting name
that shall not be cut off.

These were a people, he said, that formerly had not been allowed access to the assembly.  They had been a people cut off—unwelcome because of what we might refer to as their gender identity and expression—but now they were welcomed.  “We must name what God has named,” he said.

TransEpiscopal members were sitting in a row in the gallery.  When he said that, we all just lost it.  I tweeted 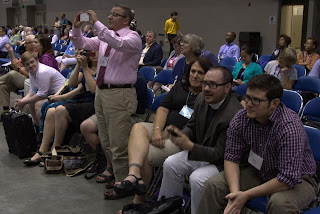 #GC77‬ Dio Ala: we r to establish kingdom here on earth, now. Let not eunuch say I am a dry tree (Is 60); we must name what God has named

#GC77‬ Dep from Alabama: wow, you absolutely made my day ‪#TransEpiscopal‬

Shortly thereafter, debate finished.  Again, as expected, and as happened in 2009, a Deputy (Diocese of Albany) requested a vote by orders.  This tactic makes it more difficult to pass legislation.  Instead of a voice vote, in which a simple majority suffices, a vote by orders tabulates by each diocesan deputy team (what’s called a Deputation).  The votes of evenly divided deputations count as “no” votes.  The most contentious resolutions tend to be tabulated in this way.  It also delays the results, as they must be certified.  So, as Deputy business continued, we waited.  We stood up and sang “Be Thou My Vision.”  A fifteen minute recess came and went.  Still no results.  We were on the edge of our seats once more.  Finally, a question emerged as to when we would hear the results.  Secretary Straub let President of the HoD Bonnie Anderson know that she had the results already.  No, she said, she had not yet received them.  But then—aha!—she realized they had been before her for some time. All of us seated in the gallery roared. 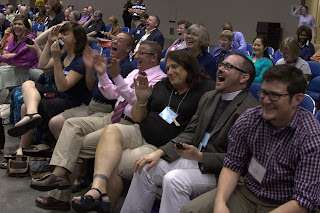 She read them aloud: we had done it.  A landslide. 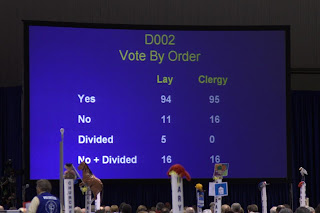 **Photos by Anderson C (except photo #2)
Posted by Cameron Partridge at 12:14 PM