Meant To Be Transfigured

And it’s a wrap.  General Convention 2012 is now one for the history books.

From my perch here on my last night in this Indianapolis hotel room, I am struck by a combination of wonder, gratitude and just plain exhaustion.  This church has done so much over the last couple of weeks, and they’ve also been long. 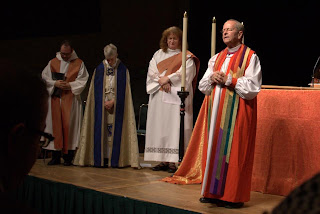 And in that spirit of Eucharist – of thanksgiving – and of the comfort and challenge communion offers, I offer a couple of snapshops from my experience of two communion services in the latter part of Convention:  The Integrity Eucharist and the TransEpiscopal Eucharist.

It was a huge honor to serve alongside Bishop Mary Glasspool, Bishop Gene Robinson, and Deacon Carolyn Woodall in the service.  And words cannot describe the emotion of the evening, which was a capstone to the passage of resolutions D019 and D002 earlier that day. The crowd of 1600 was positively elated.  Members of the TransEpiscopal team sat in seats of honor in the front row.  I have no words for how I felt looking out from the platform, seeing both longstanding TransEpiscopal teammates and newer members, several of whom are mentees (or, as became our GC joke, padawans…) and friends from Massachusetts.  I was particularly proud of our young adult presence this year.  There they all were being preached to, directly, by +Gene Robinson, who emphasized again and again, “we were meant to live in tents.” 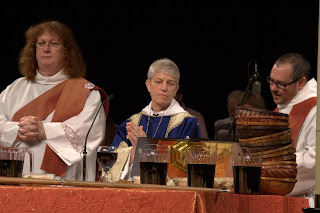 Referencing the nomadic life of Abraham and Sarah, he underscored how we should expect to be on the move, to be challenged, to grow comfortable with new understanding and then to be challenged yet again.  This is the work of the Spirit, +Gene preached, the Spirit that continues to flow among us, opening us to truths that Jesus told us we could not yet bear.  As John 16:12-13 puts it, “I still have many things to say to you, but you cannot bear them now. When the Spirit of truth comes, he will guide you into all truth.”  This has become one of my favorite passages over the last several years, particularly since I began working in earnest on trans issues in the church.  It's obviously one of +Gene’s favorites as well.

The following day the House of Deputies debated one of the major LGBT related resolutions of General Convention, #A049, which authorized a blessing of same sex couples that was developed over the previous triennium.  It, too, passed in a landslide.  It was a huge moment for a church that does so much of its theology through its liturgical practice and development.  It is one thing for couples to already be able to receive a blessing—or even to have their marriage solemnized in church, as Bishop Shaw authorizes clergy to do in the Diocese of Massachusetts—but it is another thing for The Episcopal Church to officially authorize a blessing rite.

Meanwhile, TransEpiscopal was preparing for another Eucharist.  Today I noticed a tweet from someone that read, “I hesitate to ask, but what is a TransEpiscopal Eucharist”?  In short, it was a service of Communion organized and lead by members of TransEpiscopal to which all were invited.  We came into the 2009 Convention with no plans for such a service, but were persuaded by friends within TransEpiscopal, Integrity, and the Episcopal Women’s Caucus to gather in that way.  In 2009 it was small—maybe twenty people – but very powerful.  We gathered in a circle around a table at the back of Integrity’s conference room, shared scripture readings, a group reflection, and the holy gifts of bread and wine.  At one point, someone held up a camera and snapped a photo that conveys well the service’s intimate feel.

This year we decided to do a service again, planning the liturgy more in advance yet still leaving plenty of room for the Spirit to move our preparations.  As Iain Stanford and I finished putting the liturgy together in Integrity’s nerve center, the debate in the House of Deputies on the blessing liturgy was live streaming.  The liturgy passed just as we finished our work.  What a day! 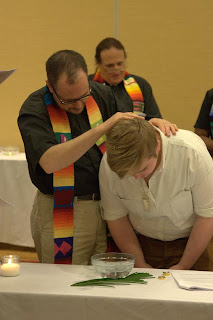 As it so happened, our openness to the Spirit’s blowing allowed us to transform the service into a combination of both Baptism and Eucharist.  One of the totally unexpected delights of the Convention was meeting a genderqueer identified transman who, it turns out, came into Convention considering baptism.  TransEpiscopal volunteers instantly bonded with him, grafting him into the team.  And when Elizabeth Kaeton, President  of the Episcopal Women’s Caucus, baptized another General Convention attendee in the hotel fountain earlier this week, our new friend wondered whether he too might take this step here, rather than back in his home state.  Several long, inspired conversations later, it was apparent that the TransEpiscopal Eucharist was the perfect context for this moment.

I had never had the privilege of doing an adult baptism before, nor had I baptized someone from the trans community.  This was a truly holy moment.  It also followed a long period of reflection—in place of a sermon—in which nearly all of the forty or so gathered people participated.  There was such joy, love, wonder in that room.  It was such a privilege to see the various roles played by both clergy and laity, trans and allied.  As Rev. Carla Robinson invited us, we all shared the bread and wine with one another, a fitting follow-up to the renewal of our baptismal covenants.  We were living fully into our membership in this one body—this changing, challenging body—and not simply our own, there in the Integrity meeting room, but that of the wider convention, of the wider church. 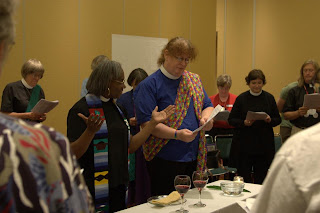 As we come to the end of this powerful Convention, we stand at a kind of commencement.  An ending/beginning.  We are stepping into a new chapter in the life of The Episcopal Church.  TransEpiscopal’s and IntegrityUSA’s prioritized resolutions were and are part of something much larger.

+Gene Robinson told us, “we were meant to live in tents.”  Yet even tents can perhaps prove  too constraining.  On the Transfiguration Mount where Peter, James and John beheld the already/not yet resurrected Christ, Peter’s impulse was to “make three booths” or “dwellings,” to try to pin Jesus down, to pitch his tent among us and stay for a while.  A long while.  But we weren’t meant to stay on that mount forever.  We were meant to travel back down, to walk through unforeseen valleys and reach the other side.

We were meant to be transfigured. 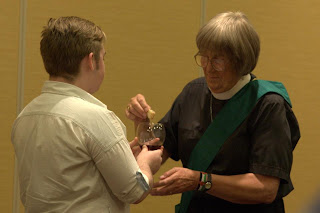 
**All photos except the 2009 TransEpiscopal Eucharist, were taken by Anderson C.
Posted by Cameron Partridge at 1:12 AM