Lambeth: a Look Backward - and Forward- from the Fringe 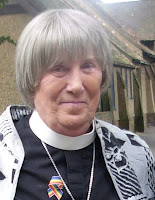 by the Rev. Vicki Gray

Now more than a week after its closing Eucharist, I remain hesitant to write about the results of Lambeth, primarily because the nature of those results remains so unclear from a perspective of someone still very much on the fringe. I hope, therefore, that you will accept what follows as the very personal reflections of one pilgrim on a continued journey.

In Canterbury, the nature of that fringe was quite literal, with “fringe events” being listed as such at the end of the official program and most often being held away from the University of Kent campus where the bishops met daily under a blue circus tent and in smaller Indaba groups. The fringe event on sexuality and mission that I 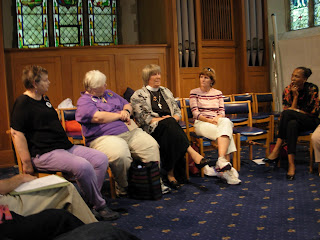 spoke at with South Africa’s Nomfundo Walaza, for example, was held at St. Stephen’s, Hackington, a lovely parish church a few miles away.

St. Stephen’s, by the way, was home to the two dozen LGBT organizations that made up the Inclusive Church Network at Lambeth. From its parish hall, our communications center, the Network produced a very professional daily newsletter, The Lambeth Witness, that was much in evidence on the Kent campus. Speaking of witness, our hosts at St. Stephen’s deserve our special thanks and blessings, having received a flood of hostile messages for their hospitality.

Adding to the sense of marginalization were the fences and police presence that cordoned off the blue tent. Then there were the color-coded lanyards that restricted access to that and other venues. Lacking an official one and feeling playful, I bought a multi-colored lanyard at the Lindisfarne booth in the “Marketplace.” It bore the message “A Christ Centered Life.” That, however, proved insufficient to gain admittance to the closing Eucharist at Canterbury Cathedral. Having journeyed six thousand miles for the occasion, I was almost moved to tears as the Cathedral’s massive West Gate was slammed shut before me. I stood more than a few minutes in the drizzle, contemplating the huge green copper Christ above the gate, his face and out-stretched hands seeming to say “I did the best I could.” 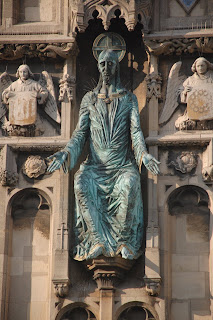 To be sure, a degree of security is always necessary at such events and the bishops needed and deserved the opportunity to get to know each other in peace and quiet. Still, the panoply of barriers bespoke symbolically of the exclusion felt not just by members of the LGBT community, but by the laity in general. I for one felt very uneasy…like an object rather than a subject. Having one’s life in the church discussed without a voice or without even being privy to the discussions is alien to being an Episcopalian.

But we were there to witness, to convey to the bishops and anyone else who would listen to the lived experience of being gay, lesbian, bisexual, or transgendered in an Anglican Communion that continues to judge us harshly. The opportunities to do so were limited, the venues often imperfect, the responses sometimes hostile. But we did the best we could and I am satisfied that our voice – however faint – was heard…especially in one-on-one conversations that are the stuff of relationship.

During my week on Lambeth’s fringes, I had several such conversations with bishops from Africa, Canada, England, and, yes, other dioceses in the United States. And, despite the complaints of folks like Egypt’s Bishop Mouneer Anis, we did not “chase” or “shout” at anyone. We engaged others quietly - in Bible studies on John that paralleled the bishops’, around the Marketplace, and on walks around the campus. On one such walk I observed more than one bishop intently reading our Lambeth Witness. On another I was pleasantly amused when a young woman, spying my collar and rainbow ribbon, urged me to “keep up the fight,” adding, as she strode off, “There are a lot of ‘normal’ people behind you.” But I knew that. Kate Salinaro was there with us; Geoff Diamond sent special greetings; and your prayers were felt.

As my bishop, Marc Andrus of the Diocese of California, and other bishops have already attested, perhaps the greatest gift of Lambeth was the opportunity to build face-to-face relationships, to put a face, hopefully Christ’s, on an otherwise abstract issue. For my part, I left Lambeth with wonderful new relationships and old ones renewed. And I found new strength in solidarity with LGBT sisters and brothers from around the world, gaining immeasurably from their experience in places that are not always as hospitable as the Bay Area and sometimes downright dangerous.

How good to hug Davis Mac-Iyalla of Nigeria upon learning that he had just won asylum in Britain; to bask in the quiet courage of Kenya’s Michael Kamindu; to take communion bread from Uganda’s Bishop Christopher Senyonjo; to hear the fresh perspectives of New Zealand’s Jenny Te Paa; to stand in witness with Nomfundo Walaza;. 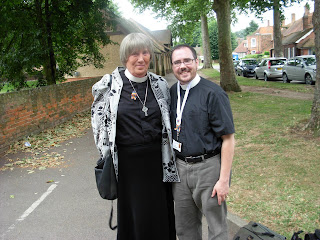 to share poetic insights with England’s Nicola Slee; and to renew acquaintances with old friends like South Africa’s Bishop Rowan Smith, who shared my amusement about lanyards, and Cameron Partridge, a transgendered priest from Massachusetts who has done so much to expand the space for transgendered people within the church and within the LGBT community.

But what of substance? We have to ask: Have we moved forward or backward or sideways on those issues of sexuality that have so divided the Communion? More importantly, can we feel the Spirit moving in our midst? Do we know where that Spirit, blowing ever stronger, is moving us?

I have the feeling that, in his last minute insistence on a Covenant and a tri-fold moratorium on same-sex blessings, the ordination of gay clergy, and inter-provincial “invasions,” the Archbishop of Canterbury “seized defeat from the jaws of victory,” ignoring, it seemed, the bishops’ more pastoral Reflections paper and pushing aside the seeming consensus to kick the most troublesome issues down the road another decade. Moreover, by insisting on a meeting of primates within the next several months to consider these matters, he may inadvertently damage the unity we all still seek, perhaps speeding up the birth of what Presiding Bishop Katherine has called “something new, which none of us can yet fully appreciate or understand.” She is right in saying that “the Spirit continues to work in our midst.” And Bishop Marc is right in affirming that, at least in the diocese of California, we cannot turn back on same-sex blessings, and in calling for a “Communion-wide commitment to safeguarding the civil rights and safety of lesbian, gay, bisexual and transgendered people." But both are also right in calling for patience, generosity, and a commitment to remaining in conversation “to both understand the position of those to whom that moratorium is important, and to convey the reality of our life together to the world.” As the Communion teeters on the edge of a tipping point, we can do nothing less. God help us all in this crucial period so that, as Katherine put it, “all may more fully know the leading of the Spirit.”
Posted by Cameron Partridge at 4:56 PM