is the title of a 1944 film written, produced and directed by Michael Powell and Emeric Pressburger, starring Eric Portman, Sheila Sim, Dennis Price and Sergeant John Sweet (U.S. Army) who plays an American soldier. Sweet’s character, who is brash and cheery - a stereotypical English view of Americans at that time - works with the English, a gentle sergeant and an attractive land army girl, to track down the ‘glue man’ (who under stealth of night and the blackout tips glue over the hair of young women), and their collaboration is playfully observed.

At Lambeth 2008 the Inclusive Church Network was a coalition of African, American and English organisations which was not without its tensions as people played up to and defied the stereotypes. One example of the cultural differences between England and America that I observed, as I compared what I was experiencing with the accounts in various blogs, was the way that people’s openness becomes so heavily politicised in the US, while LGBT clergy (and bishops) are rendered almost invisible in the UK. Perhaps it has something to do with the vehemence of the conflict between ‘conservatives’ and ‘liberals’ (sorry, I know that the labels are crude, but they will have to do) in the US compared to here in the UK. I realise that things can get nasty here, but British pragmatism - some would argue duplicity or hypocrisy – often takes the heat out of the controversy, and also, sadly, the passion.

Such differences are both fascinating and troubling; add to them the very different cultures and ethos of the other continents and provinces of the Anglican Communion and it is easy to appreciate why the search for unity is proving so long and hard. At Lambeth, the Inclusive Church network organisations, together in one place for three weeks, had to wrestle with the ‘principalities and powers’ that could easily have undermined their co-operation, but like the characters in A Canterbury Tale they remained united in their task. 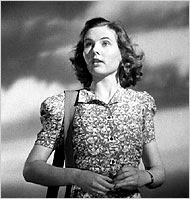 In the film the English and the American unite to expose the identity of the ‘glue man’, but when they solve the mystery they are confronted, not with a monster, but a local worthy, Thomas Colpepper J. P., who is keen to hand-on the cultural heritage to the next generation (of men); a good person in many respects, but with a complex relationship to women. Sound familiar? We keep being told that (partnered) gay bishops and same-sex blessings are only ‘the presenting issues’, and that the real controversy is over the interpretation of Scripture; but the fault-lines exposed by the recent vote in favour of women bishops in the Church of England, and the relatively tiny number of women bishops in the Anglican Communion, suggests that ‘the woman issue’, like the scope of biblical criticism, is as troubling today as it was for Victorian Anglicanism.

Sitting in the Cathedral, at the Eucharist on the second Sunday of the Conference, when the Dean preached, I wondered how such a genteel religion, moderated by English compromise and diplomacy, could have spawned the factious Communion we know today; then I recalled how the missionary societies had transported the fierce religious divisions and controversies of the Victorian era to those parts of the globe that were once marked in pink to denote their membership of the British Empire. Again, we will miss the complexity of the current Anglican dynamic if we neglect the history and impact of colonialism. The real star of A Canterbury Tale, as has often been noted, is Canterbury Cathedral itself – the interior had to be faithfully recreated in the studio, due to wartime restrictions – where the happy outcomes to the hopes and longings of the young characters, their lives dislocated by war, are celebrated. Early on in the film there is a flashback to Chaucer’s pilgrims wending their way to Canterbury ‘the holy blissful martyr [St Thomas á Becket] for to seek’, and although I did not visit the actual shrine, I was conscious of its proximity that morning in the Cathedral, which, as the Dean reiterated, was a place of hospitality, where people have always been made welcome and at home. Presumably he intended this description as an image of how the Communion should see itself, and Lambeth 2008 was a place where it was possible to believe that this might happen, despite high security fences and tight protocols. As Colpepper says in the film, ‘pilgrims to Canterbury often receive blessings.’ 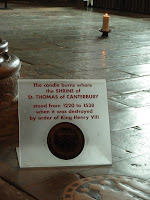 The day before this service, lured by the panpipes of the Melanesian Brotherhood, I had made my way over to the lawn where the bishops were gathering for their group photo, and took the opportunity to meet and talk with conservative bishops; just as, in the afternoon, in the marketplace, I visited the stalls of the more conservative organisations, and spoke with their representatives. It’s easy to demonise one another on a blog, or from another side of the globe, but not when we to meet person-to-person, as the bishops discovered in their indaba groups. But the most moving moment of the Conference for me, and the most blesséd, came a few days later, when I returned to the campus to meet someone who had lodged with me for a month in 1980, and is now a bishop in West Africa. We had not set eyes on each other for twenty-eight years, and what happened when we met is another Canterbury tale, but far too personal to be told here.