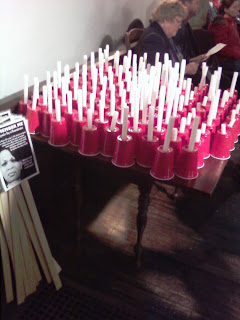 I wrote this piece for the Walking with Integrity blog

November in the Episcopal Diocese of Massachsusetts has been quite the month on the LGBT front with big ticket items during our Diocesan Convention, to Transweek and Transgender Day of Remembrance, to this weekend’s announcement about the role of clergy in same sex marriage.

At our Diocesan Convention during the first weekend of November, a resolution was overwhelmingly passed expressing our hope that Bishop M. Thomas Shaw III would give clergy permission to legally solemnize same sex marriages. +Tom has long been a supporter of LGBT people in general -- – and speaking as a trans priest whom he ordained, I mean it when I include the T – and equal marriage in particular, stepping out in support of equal civil marriage during this state’s protracted battle over it.

But once gay couples were legally allowed to wed, Episcopal clergy were still limited to blessing said couples. And while I realize just being allowed to do blessings would be a coup in some dioceses, here being limited to blessings felt like a pastoral nightmare. I can’t tell you how many clergy have had repeated conversations with couples about how they could solemnize some marriages but not others. Some clergy have refused to solemnize any marriages in the in-between time of the past five years. And so, while the conversation about whether we should even “be in the marriage business” as legal representatives of the state goes on, that is a conversation that I suspect will take this church a long time to sort out. It’s a lot more difficult to disentangle than I think people on all sides of the debate realize. In the meantime, to me it has made no sense to refuse to let same sex couples in the solemnization door while we figure out whether we want to restrict our involvement in all marriages to blessings.

Another way I have personally faced this issue is in doing trans marriages. We who are trans also face limitations in our ability to wed. Much depends not only on whether our partnerships are gay, bi, or heterosexual – just like everyone else -- but also on whether our legal documentation (e.g. drivers licenses) accurately reflects our gender. And when I say accurate, I mean whether it reflects our identities, not the meanings that others might write on our bodies. In some states changing appropriate identification is easier than in others (for instance, Ohio is notoriously difficult). So when a couple with a trans member has approached me to do their wedding (and I have now done several), one of the things I have had to ask at some point is what the gender markers their drivers licenses say. In some cases I have been able to bless only and in others I have been able to bless and solemnize. Each time I have been aware that I am part of the ongoing transformation of marriage in this time and place. Because, as I see it, marriage is not now and has never been static. Its meaning and form has long been changing. What was the miracle that Jesus undertook at Cana? The transformation of water into wine. Our relationships are to be sacred vessels in which we walk together through the changes and chances of this life.

But I have to say—and I say this as someone who obviously cares a lot about the marriage debates -- all the energy we pour into marriage can get pretty irritating to the trans community. Because even though we are impacted by the rules regarding marriage as well, marriage is not the most important thing to the trans community (insofar as we can say there is a single trans community—there are indeed numerous communities). Protecting our most basic human rights are. Keeping members of our community safe from violence – as our sisters of color most often experience – and free from often blatant discrimination on the job, in schools, housing, credit, and medical care, is what we are most concerned about. And so we are pleased that the Matthew Shephard Hate Crimes Act is finally now law, but we wait eagerly for the passage of a fully inclusive Employment Nondiscrimination Act and the passage of local and state laws that safeguard us in our various communities. 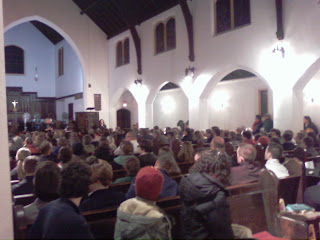 November is a month that the trans community around the globe is increasingly claiming as its own. The main impetus for this is Transgender Day of Remembrance (TDOR) which takes place every year on November 20th. Fourteen years ago, an African American Bostonian named Chanelle Pickett was murdered here in Boston on that date. I remember it well because I was a first year MDiv student interning at the Victim Recovery Program at the Fenway Community Health Center at the time, and it was also my birthday. Three years later, on November 28th, 1998 another African American woman named Rita Hester died in Brighton, MA, three blocks from the congregation I now serve, St. Luke’s and St. Margaret’s. This murder sparked a vigil on Brighton Avenue across from the place she was last seen. One year later, the trans community in San Francisco marked that anniversary with the first ever Transgender Day of Remembrance. And so the TDOR tradition, which is now international, was born.

Last year for the first time Boston’s TDOR was held at St. Luke’s and St. Margaret’s, in a secular event that packed the small church. This year, once again, we were asked to host this event (read about it here in the Allston/Brighton TAB; photos by Marilyn Humphries are here). It was a particular honor to be able to share with the gathered community that at its General Convention this past summer The Episcopal Church went on record in support of our full civil rights. And in another important demonstration of support and encouragement, the Crossing, the emergent church style congregation at the Cathedral Church of St. Paul in Boston, held a special service in honor of TDOR on Thursday evening, November 19th, also hosting Transcriptions, the local trans/queer themed open mic. More and more Episcopal congregations are opening their arms to trans people.

And then yesterday lay and ordained leaders in Diomass received a beautifully clear letter from our bishop declaring that as of Advent I clergy in this diocese are indeed authorized to solemnize the marriages of same sex couples (read about it in the Boston Globe or Bay Windows) . No more do gender markers on licenses As I talked about it on the phone with a friend and fellow trans priest, I said, “what a relief!” He replied, “I know—now I wanna run out and find a gay couple to marry!”

And so life here in Massachusetts continues to move forward with blessings amid all our complexities. But to me the greatest gift of all this November is my son who was born in mid-October. Today, literally as I wrote this piece, he smiled at me for the first time. God is so good.