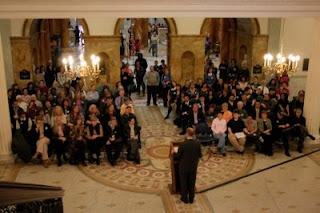 I arrived with fellow members of the Interfaith Coalition for Transgender Equality(ICTE) at 10am. What an amazing sight it was to emerge from the main stairs and see so many people gathered-- at least as many as last year, and likely more. MTPC has now put up a number of photos from the event (source of the photos in this piece).

I was honored to briefly speak as one of the co-Chairs of ICTE (the other being Mycroft Holmes) and to introduce two other clergy speakers, 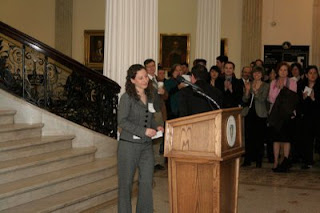 Rabbi Stephanie Kolin (photo, left) of Temple Israel in Brookline, and Rev. Will Green, Pastor of St. Nicholas United Methodist Church in Hull. I'm hoping to be able to reprint their remarks in the coming days. In the meantime, what struck me about Rabbi Stephanie's comments was her strong claim that the work we are all doing is holy work, and that the place in which we were standing was a holy place. Pastor Will (photo, below right) passionately underscored how supported we are in our struggle by communities of faith-- much more than we know. 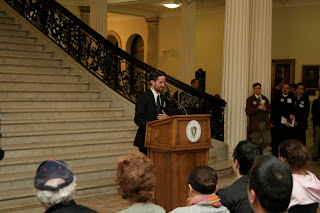 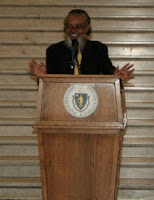 One particularly firey speaker-- whom I had to follow directly (!)-- was the Honorable Byron Rushing, a member of the Massachusetts House of Representatives. He spoke of how we weren't gathered to gain the rights of life, liberty and the pursuit of happiness, because we already have those rights. Massachusetts has failed to live up to its obligation to guarantee those rights, he said, for which the state has no excuse. We were there to hold the state to account. Amen!

We heard several speakers who shared stories of discrimination and extreme difficulty. One such story was told, haltingly, by Ken Garber, the father of a transgender son, CJ, who died a couple of months ago. I remember Mr. Garber speaking in support of his son at the hearing last Spring, and it was so devastating to hear of CJ's death. I attended this young man's funeral a couple of months ago, and my heart has been with the Garber family ever since. Even incredibly supportive parents cannot finally protect trans young people from the pervasive toll of the cruelties that lie outside a home's door. 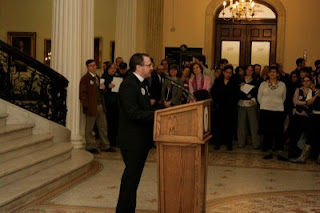 As I look back on this incredibly long day, the overall pattern is of border walking, crossing in and out of contexts and communities that often misunderstand one another. As a clergy person at the trans lobby day-- and quite visibly clerical at that-- I felt like an emblem, a living, breathing progress report on how far religious traditions in general and my own in particular have come in their support of transgender people, and the distance they still have to travel. And so it was important to me to state quite clearly the truth for which the Interfaith Coalition for Transgender Equality stands: that people and communities of many faiths support transgender people, and that transgender people come from and claim many faith traditions. I talked about how proud I am that my own diocese, the Episcopal Diocese of Massachusetts passed a resolution in support of exactly what we were doing at the State House today. The audience interrupted me at that point to clap, which really moved me. I was reminded of moments at Trans Day of Remembrance and Diocesan Convention last November, when the intersections of my particular faith and gender journeys felt not only present but in some sense uplifted.

I then said that for Christians, this week is Holy Week, the most significant, and indeed holy, week of the entire liturgical year. And I said that, for me, being at the State House and doing what I was doing right then was a spiritual practice, a fitting complement to the several other spiritual practices of prayer and worship that I will be doing as this week continues. These practices are of a piece for me, I explained, because of the narrative that propels the events of Holy Week: the movement from bondage to freedom, from fear to hope, from death and despair to transformation and newness of life.

After the conclusion of the event, a parishioner and I made our way first to the Cathedral Church of St. Paul where a service of "the Blessing of the Holy Oils" was in progress, and then to the university department where I am teaching a one-on-one course ("Junior Tutorial") this semester. When we got to the cathedral, Bishop Tom Shaw was in the midst of his sermon, sitting in the central aisle. As we stepped into the cathedral, directly opposite him, he was in the middle of saying, "gay, lesbian, bisexual..." I felt like something of a transgender jack-in-the-box, with my "trans rights now" sticker still stuck to my lapel from the rally. I imagine Tom was saying something celebratory about the Vermont override, the announcement of which had elicited prolonged cheering during the rally.

The theme of the service was healing-- the various ministries of healing, lay and ordained, taken up by people throughout the diocese. There was a moment in the service when people in healing ministries were invited to come forward for the anointing of the palms of their hands. I walked forward with my parishioner, who recently started a queer, non-sectarian spirituality group at my church (called "BEND"). I loved seeing people with whom I work in the diocese in this context, in the middle of this intense week. And particularly after being at the rally, it felt good to walk across the Boston Common and into the cathedral. I felt both a sense of difference between how I spent my morning and how I imagine most people in the cathedral spent theirs, and a sense of affirmation that I was indeed walking from one holy space and activity to another.

From the cathedral, I made my way to a coffee shop, where I finished preparing for my class. Somewhere between the Statehouse and the classroom, I divested myself of both the "trans rights now" sticker and the clerical collar, aware of myself crossing into yet another communal space, this one academic. The course, "Thirty Years of Trans Studies" is a blast to teach, and also very much of a piece with the morning's activities.

What a day it was. And the holiness of the week continues.
Posted by Cameron Partridge at 2:01 AM