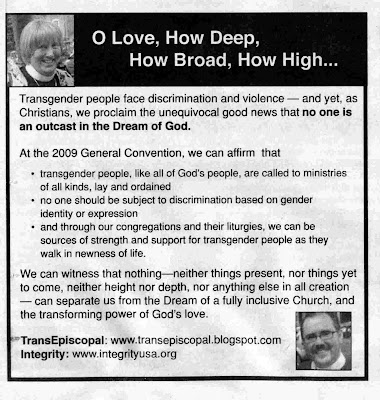 Collaboration between TransEpiscopal, Integrity and Claiming the Blessing has resulted in a new advertisement in the April issue of Episcopal Life. With photo(s) supplied by Vicky Gray, content culled by Gari Green and Donna Cartwright, text written by me, editing and layout by Jan Adams of Claiming the Blessing, and funding provided by Integrity/Claiming the Blessing, this ad not only lays groundwork for General Convention but is also a first in its own right.
Posted by Cameron Partridge at 2:52 PM