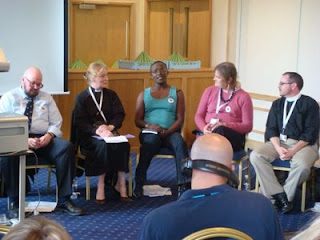 It’s the end of my second full day here in England, and what a day it was: this afternoon I participated on the panel "Listening to Trans People." I was one of five people total: two transmen (female-to-male), three transwomen (male-to-female); one woman from Nigeria, one American, three British people; one Methodist, one Buddhist, three Anglicans. As I mentioned in my previous entry, the panel was organized by Rev. Christina Beardsley and sponsored by the Sibyls, a group that fosters Christian spirituality for trans people.

As it turned out, the bishops had a time conflict with our session, which curtailed their attendance. Nevertheless, we did have at least four bishops along with several other interested people, including some reporters. We only had an hour, a challenging limitation with four different panelists.

Christina, who served as M.C., began by introducing herself. She had been ordained in the Church of England for twenty-three years prior to her transition in 2001. She now serves as a hospital chaplain in London, but in the first years after transition, she felt as though her bishops were being cautious with her, leaving her with the feeling of having to prove herself to them. Working in a hospital has gone smoothly because equal opportunity policies must simply be followed and gender is not an issue, which makes it easy for her to get on with her job. Christina also reported that although the Anglican Communion Listening Process has officially focused upon homosexuality, it has included a few interviews with transgender people, including herself (I also participated in a Listening Process event with Canon Phil Groves in New York City last June).

Stephen then did a half-hour long presentation that emphasized how sex, gender and sexuality each exist on a continuum and interact with one another. By the end of his presentation, I sensed that people in the audience might have been reeling with information overload. But then the second half-hour emphasized stories, placing Stephen’s framework in context and humanizing what might otherwise seemed abstract and overwhelming.

Stephanie spoke movingly about her experience growing up and coming into her own as an evangelical Christian and transwoman in England. She spoke of how God has lifted her up through a number of challenges, being, as she put it, “a compulsive gambler who no longer gambles, and a stammerer who no longer stammers.” God’s uplifting has carried her through her transition, “to come into my gender identity, to live in truth, and be a true disciple of Jesus.”

Mia Nikasimo, who was born in England but grew up in Nigeria, spoke of how horrifically oppressive living in Nigeria is for trans people. She left twenty years ago, and returned to England where she has lived ever since, when she realized that not only her own life but also that of her family, might be in danger if she stayed. She spoke of "trans women and men who have to live underground," lest they loose their lives.

I spoke last. John Clinton Bradley of Integrity was able to video my comments and shared them with me (see below, and also his post on the Walking With Integrity blog). I ended by saying that I could understand if those listening to us were overwhelmed at the thought of adding transgenderism to a Listening Process that has, as I discussed in my last post, revolved around the issue of human sexuality in general and homosexuality in particular. But if adding transgender into the mix turns our attention to how varied and complex both gender and sexuality are, in an array of contexts around the world, that could actually help deepen a conversation that has gotten stuck in an overly black-and-white loop.

After all the presentations were finished, Christina asked if one of the bishops would end our meeting with a blessing. This was an unexpected request—the inspiration for it came to her in a flash, she later told me. There was a slight pause. And then my heart soared as my bishop, Tom Shaw, stood up and prayed (in words I'm grateful to have taped),

“Gracious God, we praise you and we bless you for the gift of life. Thank you, God, for all life. Especially we thank you for the lives of the people that we’ve listened to this afternoon. Open us, God. Open us to the whole of your creation. And the blessing of God Almighty, the Father, the Son and the Holy Spirit be with you this day and always. Amen.”
Posted by Cameron Partridge at 3:38 PM