In a Rising Storm, African Voices 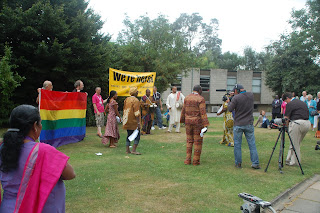 It's been an intense last thirty-six hours here at the Lambeth Conference in Canterbury, England. Monday afternoon the bishops held a press conference in which they announced that the Windsor Continuation Group, a committee appointed by the Archbishop of Canterbury to recommend a way to hold together the various fractured provinces of the Anglican Communion. For more on the specifics of this report, see this report from Episcopal Life Online. The basic proposal was for a moratorium on consecrating any more gay bishops and on blessing same sex unions, on the one hand, and for a cessation of progressive diocesan boundary violations by conservative parts of the Communion. This report is now being discussed by the bishops as they meet daily in their small, relationally oriented Indaba groups.

What the bishops seek to do with this report remains to be seen, but whatever they do, it is important to remember that the power of the Lambeth Conference, while persuasive and significant, is not finally juridical. In other words, this Conference does not declare church law for the whole Communion, regardless of how much leaders in various parts of the world may wish it were so. We are an autonomous collective of churches around the world, descended from the Church of England, who value our common heritage and prayer as well as the variety of our contextual experiences and identities, very highly.

Nevertheless, Monday's report was very angering for the LGBT coalition here-- and galvanizing. That night, this coalition, including TransEpiscopal, released a response which you can find here. Printing it out and interpolating it within our already completed daily paper, the Lambeth Witness, made for a late night. By the end of the evening it had started to rain, marking a break in the warm, humid weather pattern that has added to the increase in tensions here over the last few days.

But yesterday morning I awoke to a fresh, cool breeze, and a feeling that the tide could turn yet again. That feeling increased at an amazing event Tuesday afternoon called "African Voices." Like "Listening to Trans People," this was a panel, officially accepted by the organizers of the Lambeth Conference as a "Fringe Event" to which bishops could come. The event drew seven bishops as well as several episcopal spouses, not to mention numerous members of the media and other supporters. Prior to the panel, several LGBT people from Africa gathered on the lawn outside Eliot College where, accompanied by drummers, they danced exuberantly for about an hour. Several of us stood behind them holding a huge rainbow flag and a large yellow sign that read, "We're Here! lesbian, gay, bisexual, transgender Anglicans." 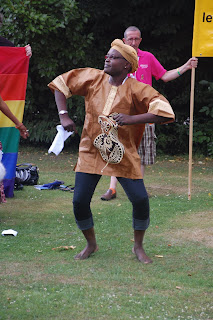 One of the dancers and panelists was also one of our panelists on Friday, Mia Nikasimo. Mia, who identifies as a trans lesbian, is a woman of quiet, razor-sharp insight whom I have enjoyed getting to talk with over the last few days. In today's panel, as in our panel Friday, Mia talked of how transgender people particularly in Nigeria, but also in other countries on the African continent, struggle with extreme oppression. Because of a technical problem, the filming by Integrity on Friday did not capture Mia's presentation, but she has agreed to write something that I can post here, speaking particularly to her spirituality as a Buddhist as well as the group she has founded called Trans Afro.

Davis Mac-Iyalla (pictured between me and Christina Beardsley, below) was another participant in both the dancing and the panel. Davis, a gay man who heads Changing Attitude Nigeria, made news earlier this week when he was granted asylum in the UK because of death threats and attacks leveled against him in recent months. Davis's major point, which he says and lives with great power, is that he and his comrades are living proof against the claim often made by conservative bishops from Africa, that there are no LGBT people in their countries.

After Davis, another panelist, Sokari, added a crucial contribution to the conversation concerning critique of African bishops. LGBT-positive Anglicans need to be careful not to racialize homophobia, as if homophobia is somehow simply an African issue, which it clearly is not.

Later in the evening yesterday I heard from Mia again, along with Sexual Minorities Uganda leader Viktor Juliet Mukasa. They were interviewed as part of a film called Voices of Witness Africa, by Katie Sherrod and Cynthia Black, a preview of which was shown here last night (and can be seen at the Walking With Integrity Blog here-- definitely watch it). Bishop Mark Andrus of the diocese of California showed the preview to a packed room. I was so moved by the stories of strength and courage shared by all the incredible people in this film and on the panel yesterday. I thank God for their life-giving witness as the mood here continues to cycle between hope and anxiety.