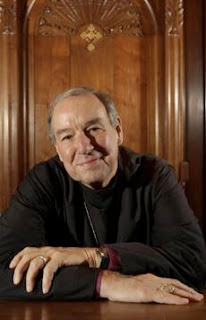 About a month ago, Bishop Tom Shaw of the Episcopal Diocese of Masachusetts wrote a blog post about a recent encounter at the gym.  I just came across it this evening, and was moved to post it here.  The post reflects on the case of Michelle Kosilek, a transgender woman who was convicted of murder in the 1990s and has recently been in the news because of a judge's decision that the state should cover the cost of her medical transition.  As I remarked in the comment I added to Bishop Shaw's post, seeing the steady stream of stories in the paper about Kosilek, and the predictable backlash against her was pretty demoralizing.  A December Boston Globe op ed put it this way:

“For the judicial system, the case [for MA paying for Kosilek’s surgery] is a no brainer.  For just about everyone else the case can be confusing at a minimum, and downright infuriating at its worst. And some of those most disturbed by the case are often those who, like Kosilek, identify as transgender.”   I have heard people in the community wonder how someone who committed murder could potentially have her medical transition paid for while most law abiding trans people have to pay thousands of dollars out of pocket—if they can manage to save up and/or get a loan.

Kosilek may be far from sympathetic, but at the end of the day, I agree with Judge Wolf’s decision.  It is an issue of fairness, of respecting her human dignity-- even if she did not respect that of the wife she murdered years ago.  For the state to make an exception in its commitment to medical coverage for those in its prison system would be, as Jennifer Levi put it, “transgender exceptionalism.”

Bishop Shaw agreed.  But what particularly moves me about his piece is its prayerful reflection on encounter-- how we do and do not engage one another, and how God continually calls us into this process:

Back at the gym.  This time the conversation was about a transgender person.  My trainer asked me what I thought about the recent controversy over the ruling of the federal court judge who ordered the Massachusetts Department of Correction to pay for the reassignment surgery of a prisoner, Michelle Kosilek, who had previously been known as Robert.  (The ruling has since been put on hold pending an appeal.)  I said that it was my understanding that the prisoner had a gender identity disorder and that it seemed appropriate, as she is a ward of the Commonwealth of Massachusetts, that the Department of Correction should provide the remedy of surgery.  I personally agreed with the judge.

This is a small gym, so everyone hears every conversation.  Before my trainer could respond, another trainer offered his opinion, which was very different from mine.  My trainer didn’t agree with me either.  Back and forth we went.  It got pretty heated and, of course, no one’s mind was changed.  These are not unkind men.  I couldn’t just dismiss them.  They are my friends and I’ve known them for years.

The conversation stayed with me for days.  It even became part of my prayer.  Mostly I was mad at myself.  I wished I had been more articulate.  You probably know how it is after a conversation like that.  I kept saying to myself:  “If only I had said this, then they would understand… .”  The more I went over it, though, I got the clear sense that God was shifting my focus from this unconvincing conversation to the deeper place of my own conviction.  God was asking me how I had come to the place where I could be open to securing the rights of a transgender person.

I knew immediately.  It was several years ago in a workshop on transgender issues.  I didn’t really want to be there but a friend had asked me to go.  Intellectually I think I understood why someone should have the right to change their sex, but I was pretty uncomfortable with the whole idea.  Then a transgender woman stood up and told her story.  She was a minister and she spoke of how she had suffered in making her decision and how she had sacrificed her career, friendships and family relationships.  She told of how alone and helpless she often felt because of the discrimination she experienced, and of how hard it was for her to fulfill her vocation.

“Wow,” I thought to myself as I listened to her poignant story, “all she wants is to practice her call from God.  She isn’t any different from me, from anyone who takes their call seriously.”  Something shifted inside of me, and the Spirit opened me to her dignity as a human being.  It’s almost always different when it’s a personal encounter like that, or when it’s someone you know.  Somehow their dignity is right there in front of you and it speaks to your dignity as a human being.

So ever since then it comes to me at odd times in my prayer:  Who else don’t I know?  Who are all the other people I’ve kept at a distance or let circumstances keep at a distance from me?  Who is God trying to put in front of me and open me to?

Wonderful insight. I think that God put certain people in our midst because he desires to do something in our lives. I also believe that the other person benefits in some way.