Making "all" mean "all" in the Diocese of San Joaquin

A post by Louise Brooks, cross-posted from the Walking with Integrity Blog

Carolyn Louise Woodall got ordained last Saturday to the Sacred Order of Deacons in the Episcopal Diocese of San Joaquin -- smack dab in the middle of California's conservative Central Valley. There was no fanfare, there were no media and there were no protesters. I was there with a film crew to document the event for Integrity’s VOICES OF WITNESS project entitled "Out Of The Box" -- celebrating the lives and witness of transgender Episcopalians.

As the service began we had our cameras ready when the Bishop asked "... if any of you know any impediment or crime because of which we should not proceed, come forward now, and make it known." We were ready … but no one came forward. It was the people's will that Carolyn be ordained and it was their will to uphold her in her ministry – and they said so, loud and clear. On the surface this was your typical ordinary ordination … but truth be told it was anything but.

As I sat in the tiny church watching this ordinary/extraordinary ordination unfold, I remembered my last trip to the Diocese of San Joaquin. It was five years ago – just after the then-sitting Bishop Schofield tried to take the diocese out of the Episcopal Church and become the Anglican Diocese of San Joaquin: a schismatic response to the ordination of Bishop Gene Robinson and the blessing of same sex unions.

Bishop Schofield – arguably one of the most reactionary bishops in the Episcopal Church – would not ordain women to the priesthood and would not give communion to gay persons. People joked that he was more catholic than the Catholics – and when he became a bishop he added the name John to his birth-name David becoming Bishop John-David.

Four of us, LGBT leaders from the Diocese of Los Angeles, traveled the long Central Valley highway lined with citrus trees, table grapes, raisins, almond groves and other visually interesting crops, to meet with the Remain Episcopal team. They were the folks who stayed. And that day this faithful remnant of Episcopalians described to us the goals they had set for San Joaquin: to rebuild the diocese, to ordain women, to welcome and include all the strangers at the gate. And as I sat there in the pew in St. Anne’s, Stockton at the ordination of Carolyn Louise Woodall, I was aware that they have come a long way in those five years. A very long way. 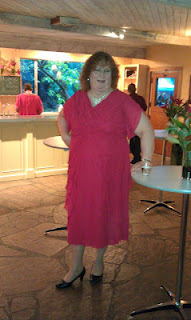 Carolyn Louise Woodall was born Clifford Lawson Woodall. She was born out of the box. "I had known I was different since I was four or five years old, I just didn’t figure out the extent of my differences until much later in life. It isn’t as if there weren’t clues, it was just that I had gotten very good at denial. I never even heard the word “transsexual” until college, and then I had a passing thought that it might apply to me, but quickly buried that thought. As time went on, however, the thought that I might be transsexual kept resurfacing and I continued to bury it as best I could."

But she couldn't bury it forever. "I could learn to live with it, start living as a woman, and move on with life or, I could kill myself. I decided on suicide that night. I sat there convinced of a couple of things. One was that I was an abomination before God. God made me male at birth and I would be unfaithful to God by changing that. Additionally, this was wrong. So was suicide, but that night I prayed that God would consider suicide the lesser sin and forgive me for what I was about to do. I had a gun in the dresser right behind me and it would be quick and easy.

Fate intervened and Carolyn was relieved." I quickly realized that I had been looking for a reason not to go through with it and was very glad I had found one."

Carolyn Woodall always loved the church. She sang in choirs from a young age and felt a call to ministry as early as she can remember. She entered the discernment process as a transgendered woman and the Church received her call last Saturday.

She was ordained by one of the great champions of inclusion and giants of justice in the Episcopal Church: Bishop Chet Talton. Bishop Talton – who previously served as Bishop Suffragan in my diocese of Los Angeles so I can brag on him a bit -- has thrown down a gauntlet of welcome in the Diocese of San Joaquin: “Whoever you are and wherever you find yourself, you are welcome here." And they are.

Carolyn's ordination service was hosted by the Reverend Lyn Morlan, Rector of St. Anne's Church in Stockton. Five years ago she wouldn't have been licensed to serve in the Diocese of San Joaquin, let alone called to be the rector of a parish. And tears came to my eyes as I watched a gay couple come forward to the communion rail as I remembered the horror story of a another gay couple being turned away at the altar a few short years ago. 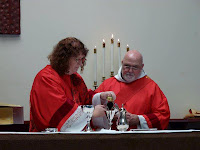 In Texas and Tallahassee; South Florida and South Carolina – and in all the other places where the full inclusion of all the baptized in all the sacraments is still a goal and not a reality. It's just a matter of time. We are at the tipping point. And we are in it to win it.

Many thanks to those brave leaders who didn't give up. To the Remain Episcopal folks who rebuilt a diocese. To Bishop Chet Talton for being the right shepherd in the right place at the right time. And especially to Deacon Carolyn Louise Woodall for modeling for us God's mission: to be your true and authentic self so you can have a true and authentic relationship with Him in order to call others into the circle of God’s inclusive love.

Louise Brooks serves on Integrity's Board of Directors and is their Director of Communications.  She is currently the Executive Producer of VOICES OF WITNESS: Out Of The Box....a video that celebrates the lives and witness of transgender Episcopalians. The DVD, complete with a study guide, will be released in May, 2012 as a gift to the church from Integrity.
Posted by Cameron Partridge at 4:55 PM