The following is a sermon that my seminarian for this year Kori Pacyniak and I composed and delivered together. We were inspired to do a combined sermon because of our discovery in conversation that we were both puzzled by the same, somewhat obscure, facet of Sunday's gospel passage. In addition, I had already planned to incorporate a story told by Rhiannon O'Donnabhain at an event we put on at St. Luke's and St. Margaret's to honor her and GLAD's February legal victory (which I mentioned in a recent blog post about recent major happenings in the transgender community). We shared Rhiannon's words in the sermon and in blog form with her permission.

CP: Welcome to the third Sunday of Easter, day fifteen of the Great Fifty Days. In these poignant days we encounter again and again, in manners both mundane and mysterious, the reality of resurrection life. On Easter Sunday itself we stood before the empty tomb and met in the Gospel of Luke an exodus of the body. Last week in the Upper Room we stood in awe with Thomas and the terrified disciples and received an invitation into a body marked by exodus. This week, by the Sea of Tiberias, we observe an Easter exodus in progress. We watch as Peter responds to the revelation that Easter is neither something that simply happened to his beloved Jesus, nor something from which he should run away, but rather an event toward and into which he must move. Easter as exodus transforms resurrection into action, into movement outward, into freedom and newness of life. Peter enacts the dynamics of this Easter Exodus encounter with his very clothing; he must put on resurrection like a garment lest, as Paul puts it in Second Corinthians, he simply be found naked (2 Cor 5:3). And yet…

KP: What was the one line that leapt out at me when I looked at today’s readings? “When Simon Peter heard that it was the Lord, he put on some clothes, for he was naked, and jumped into the sea.” How could it be that I didn’t remember ever hearing this line before? I think I would have remembered something this odd and perhaps even shocking. Slightly disturbed by my faulty memory, I glanced through various translations and discovered that the version I would have grown up with did not mention nakedness at all. Was it really just a translation issue or did some authorities not want to deal with the questions that this would inevitably bring? Why was Peter naked while fishing and why did he put on clothes to go swim to the Lord? Though I have no answer to the first question, it seems less consequential than the second question. Why did Peter put on clothes before jumping into the water to swim to Jesus? It seems contrary to every aspect of common sense. It was just after dawn, the water would still be cold and more wet clothes would mean one would be colder longer. Generally speaking, you take off your clothes to go swimming. What was it about this instance, about being told that it was Lord on the shore that makes Peter seem to defy common sense and reason?

CP: Of course, I too was struck by — even stuck on — Peter’s nakedness and how he responds with such seeming lack of logic to the presence of his risen Lord on the beach. Now, commentaries suggest that perhaps “naked” doesn’t mean “buck naked” but simply scantily clothed; Peter may have been wearing a only fishermen’s smock which he then tucks into his cincture before jumping into the water (see Raymond Brown, citing Barret, Lagrange & Marrow, The Gospel According to John XIII-XXI. The Anchor Bible Commentary (New York: Double Day, 1970), 1072). But regardless, when presented with the presence of the risen Jesus, he does two things that pull in different, almost opposite, directions: 1) he covers up his nakedness, his unreadiness, the vulnerability with which he was caught offguard; and, or rather, but 2) he still leaves everything behind and dives into the water, wanting nothing more than to be with the one who had called him with the words “follow me.” What we are observing here is a resurrection exodus in progress, in all its messiness. This is an ordinary person like each of us responding to the invitation of Easter that calls us out from our routines, disrupts our patterns of life, exposes our vulnerabilities, retells our stories in the ever-new frames of salvation history, as our current Prayers of the People puts it, as in the liturgy of Easter Vigil. 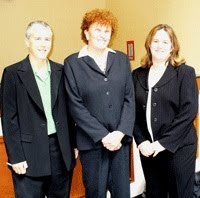 KP: We heard one such story here recently. On Thursday evening, April 8, you may recall, SLAM hosted an event to honor Rhiannon O’Donnabhain and the attorneys from GLAD (Gay and Lesbian Advocates and Defenders, the folks who helped bring Massachusetts equal mariage) who represented her in the case O’Donnabhain vs. Commissioner of Internal Revenue. The IRS had audited Rhiannon’s 2002 tax return and had deemed as “cosmetic” rather than “medical” the expenses she had written off related to her transition from male to female. They had asked her to pay back her refund, but she had refused. The case went to trial here in Boston in July, 2007, and on February 2nd the decision was announced: she had won. This was a huge victory for the trans community across the US, an early legal building block for victories yet to come.

CP: But what struck several of us, as we sat where you are and listened to Rhiannon and GLAD lead attorney Karen Lowey, were their stories. How Rhiannon’s courage propelled her out from routine and complacency into a terrifying limbo. And how that in-between place became a place where her community rose to the challenge, where her connection with community buoyed her and enabled her to move forward, even amid fear and anxiety. This was not the first time she had moved outward in this way; the story she told was a very personal one about her original decision to transition, which she has written out and given us permission to share today.

KP: “For a very long time, I felt that I was treading water in a very cold and deep ocean, barely keeping my head above water. I was afraid to start swimming for fear that someone might laugh at the way I swim… I couldn’t even see the shore…. It was always so far away. I didn’t even know which direction to swim. I was drowning! Finally, I realized what I had to do to live…… I had to start swimming! To save my life! I took a risk and started swimming because I didn’t want to drown. I wanted to live! I had been swimming for what seemed like forever and I could finally make out a distant shore! It was still a long way off, but at least I could see it! I was still not a very good swimmer. I made mistakes along the way. I had never done this before! But I was determined. I would reach that far-away shore! Finally the shore got nearer and nearer. I had never been a quitter, and I was determined to succeed at what I set out to do! In my mind, I visualized that I emerged from the water riding a white horse up onto a beautiful sunny beach. In my visualization, I had already done it…! And I did do it! I rode up and out of the water on that beautiful white horse onto the beach and rode into to a new life!”

CP: Resurrection is about living, swimming, riding, into new life. It means being willing to move outward from our history into our future, always bearing that history with us—indeed, sometimes burdened by it—even when the shore is further than 100 yards away, even when we can’t see it. Resurrection is something into which we are thrown like the deep end of the pool. It is an event and a process, indeed, an Exodus that leads to life more beautiful and mysterious than we can imagine. At its beginning we can only catch the smallest of glimpses, but it is there, waiting for us. We have to be willing to be vulnerable, to take the risk of diving in and swimming-- even if we stop to cover our nakedness first -- to leave behind the familiar to encounter the living Christ, knowing that we will never be the same.

KP: Jesus showed himself again to the disciples by the Sea of Tiberias, and he showed himself in this way. Amen.
Posted by Cameron Partridge at 2:03 PM