Bishops M. Thomas Shaw and Roy ("Bud") Cederholm of the Diocese of Massachusetts this week sent letters to Massachusetts Governor Deval Patrick, Senate President Therese Murray and House Speaker Robert DeLeo pressing them to pass the state's Transgender Civil Rights bill. "An Act Relative to Gender-Based Discrimination and Hate Crimes" (House Bill #1728 and Senate Bill #1687) is slated to either make it out of the Judiciary Committee or die there for a third straight year this Friday, May 7th. 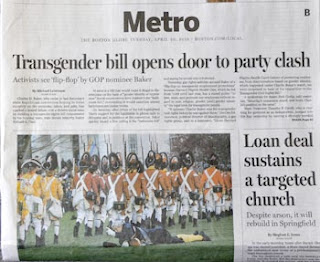 The bishops' letter follows unprecedented coverage of the bill by Boston area newspapers (including a supportive op ed by the Globe), after Republican gubernatorial candidate Charlie Baker announced that he would veto the legislation if it crossed his desk. His team handed out fliers referring to the legislation as "the bathroom bill," taking up the rhetoric of the virulently anti-LGBT group Mass Resistance (and groups battling similar legislation in other states) which tries to stoke fears that such legislation will make women and children vulnerable in bathrooms and locker rooms.

We write to express our strong support for an act to add gender expression and identity to our Commonwealth’s antidiscrimination and hate crimes laws, and to ask you to work to ensure its passage.

As bishops of the Episcopal Diocese of Massachusetts, our eyes are open to the realities of transgender people and their families. Many of them serve faithfully in the congregations and ministries of our diocese, as lay people, as deacons and as priests. They are dedicated and loving parents, children, siblings, friends and community leaders. Again and again, we hear how they have struggled against incredible odds and pressures to be true to their identity as beloved children of God, made in the image of God.

It pains us that even as transgender people claim their identities and step into newness of life, they face discrimination and violence that undermines their human dignity. A November 2009 survey by the National Center for Transgender Equality and the National Gay and Lesbian Task Force found that 97 percent of respondents had been harassed or mistreated on the job, and 26 percent had been fired for being transgender. You will recall that in November 1998, an Allston transgender woman, Rita Hester, was murdered and her killer never found. This local tragedy led to an annual Nov. 20 international Transgender Day of Remembrance, for transgender people who have died, especially those who have been killed or taken their own lives. It is fitting that our state should model amendment of life and hope for a future that is better than this sad past.

Adding gender identity and expression to the state’s nondiscrimination and hate crimes laws is no isolated concern of a special interest group. The disproportionate suffering of transgender people should grieve the hearts of all who love justice and liberty. Both the Episcopal Diocese of Massachusetts and the General Convention of the Episcopal Church are on record in support of full equality for transgender people (resolutions attached).

So many of the arguments against the full inclusion of transgender people in our society are driven by unfounded fear. Transgender people are simply seeking the removal of barriers that prevent them from flourishing as full members of and contributors to society. One need not fully comprehend what it is like to walk in their shoes to provide them with the protections every citizen—every person—is due. Please act to ensure their rights.

Resolved, the House of Bishops concurring, That the 76th General Convention of The Episcopal Church supports the enactment of laws at the local, state and federal level that a) prohibit discrimination based on gender identity or the expression of one's gender identity, and b) treat physical violence inflicted on the basis of a victim's gender identity or expression as a hate crime; and be it further


Voted by the 223rd Annual Convention of the Episcopal Diocese of Massachusetts, Nov. 7-8, 2008, Hyannis:
Resolution in support of transgender civil rights and inclusion in the ministries of all the baptized

Resolved, that this Convention submit to the General Convention the following resolution: Resolved that the words “gender identity and expression” be inserted into Title III, Canon 1, Sec. 2 directly following the words “sexual orientation” and before the words “disabilities or age.”
Posted by Cameron Partridge at 3:36 PM

Sims 4 cheats -the ultimate resource for cheats, codes, guides and more for The Sims 4 on the PS3, Xbox 360, PS4, Xbox One and PC!