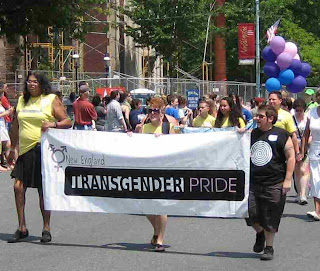 This past Saturday, June 7, Northampton, Massachusetts hosted the first New England Transgender Pride March and Rally. North Hampton’s LGBT Pride event had taken place in May, and Boston’s LGBT Pride parade is happening this coming weekend, but trans folks wanted to take a moment to lift up people across the spectrum of gender identities and expressions, and more specifically to take, as the event’s website put it, “a visible and positive stand for transgender rights.” Dedicated “to diverse representation among organizers and participants,” the event sought “to educate and build awareness of the movement against gender-based discrimination.”

As we celebrate the milestones increasingly achieved for equal marriage across this country, it’s important to remember that in thirty-seven states — as well as at the federal level -- trans folks don’t have the assurance of basic civil rights. And in one state, Maryland, recently gained protections are under threat. We still have a long way to go.

That ongoing and upcoming journey reminds me of the first reading we heard this past Sunday, June 8th, which was from Genesis 12:1-9. In it God tells Abram — the forbearer whose name and identity God would change —“Go from your country and your kindred and your father’s house to the land that I will show you. I will make of you a great nation, and I will bless you, and make your name great, so that you will be a blessing.” Abram and Sarai made their way to the land that God promised to them, and when God pointed out that land to them, they stopped and built an altar to God. As they made their way through this land, in fact, they stopped at several points, marking the stages of their progress with altars.

In a way, that’s what this New England Transgender Pride was doing — it was a day to stop, assess where we have been, to take pride in who we are, in how far we have come, and to strengthen ourselves for the various stages of the journey ahead. And it was a day to claim the promise — the promise that our unique human dignity will be honored and that this very humanity will take its place — is even now taking its place — amid all the interweaving strands of creation’s tapestry, as a blessing.

That I can sit here and type these words today, as someone who wasn’t even able to make it to this event, is because of the blessing of others’ witness. There are numerous descriptions of New England Trans Pride out there, but I came across one today that stopped me in my tracks. It turns out that Jendi Reiter, author (especially of poetry) and self-described straight ally, made her way to Trans Pride last weekend and ended up marching in the parade. As she describes, “The first-ever New England Transgender Pride March took place this weekend in Northampton, and I was there with my ‘Episcopal Church Welcomes You’ rainbow tank top and a digital camera to capture the pageantry. I was hoping to blend into the MassEquality contingent, but they were scattered around other groups this time, so I just milled around looking like I knew what I was doing, and took lots of pictures. Next thing I knew, someone had handed me a bunch of purple and white balloons, and I was marching behind the lead banner, shouting ‘Trans Pride Now.’”

Now how many of you fabulous allies out there might have hopped into a trans pride parade wearing an Episcopal Church Welcomes You rainbow tank?!

Reiter observes, “Whereas the main Northampton Pride March in May had a family-oriented, carnival atmosphere, Trans Pride was more bohemian and political. From their placards and speeches, it sounded like many trans folks felt they'd been sold out by the mainstream gay and lesbian activist groups, particularly the Human Rights Campaign's decision to support the federal Employment Non-Discrimination Act even though protections for gender identity and expression had been eliminated. Some speakers seemed concerned that groups like HRC were selling a more sanitized, bourgeois image of gay and lesbian life that ignored the poor, prisoners, people of color, and those whose sexuality and gender identity defied easy labeling. Maybe I was in the right place after all.”

It seems to me that Reiter was in just the right place, with observations right on target, and not only for the ‘secular’ struggle for trans rights. Indeed, these questions struck me as particularly timely for Anglicans as July’s Lambeth Conference draws near:

“Is being queer a state of mind? Is queerness, like Protestantism, inherently self-fragmenting, as the need for a perfectly authentic personal identity clashes with the equally real need for affinity groups? The more precisely you draw your doctrinal statement (or define your gender), the closer you get to becoming an army of one.”

These questions challenge those who view gender as infinitely refracted as much as those who would define it in strictly dualistic terms. In a sense, we have on our hands a twenty-first century version of the one and the many. To float an answer to the question about self-fragmentation (with its fascinating link between queerness and Protestantism), I believe that as we name and embody our differences with ever-greater precision we will fragment to the extent that we base our alliances mainly on the degree of our similarity. But what happens when our bonds are based not only upon similarity of experience or embodiment – “who we are” -- but also upon principle, which, for Christians, would be the good news? Upon the radicality of God’s dream in which all -- all for real, not all ‘whose manner of life’ doesn’t ‘pose a challenge’ to me – are not only welcomed but expected, listened-to, even delighted-in, and ultimately drawn into God’s ongoing project of creation? As we already know, the stages of our passage will be marked with struggle, and sometimes by fragmentation. At points we, like Abram and Sarai, will need to pause and mark with gratitude how far we’ve come, and then continue on. If ours is a mission bent on love, the journey will bring us – all of us – home. And in this process, somehow, we will all become a blessing to one another.