Trans Episcopalian Stands Up Against North Carolina's Amendment One

Yesterday, the Chapel Hilll News added the voice of another Episcopalian to the debate.  Viviane Taylor (writing under her current legal name, Sam) is a graduate of UNC, a recent Boston transplant from North Carolina, a writer,  and an Iraq War veteran who has come out as transgender.  Viviane (whose transition is reported ina two-part article -- here and here) has had  a column in the Chapel Hill News since her deployment.  In yesterday's piece, she comes out strongly against Amendment One.

Let’s talk about ‘The Law’

North Carolinians are better than Amendment One. But I get it, there are a lot of Christians in my beautiful home state. There are a lot of people who put following the will of the Lord above all other things.
So let’s talk about God. 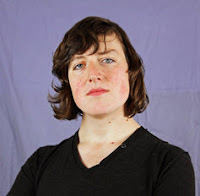 God is famous for, among a few other things, giving man The Law. Now folks today sure do like to hunt and peck with the Law, pick things they like and drop things they don’t.

If this thing The Law is going to be so important to people, well, we might as well give some small amount of energy to trying to understand what The Law is, what The Law means.

The Law is mainly found in the first five books of the Hebrew Bible. Folks like some of those five books. Genesis? Everyone knows Genesis, most have number some sort of fight over it. Exodus? It’s the model for every revolutionary group, whether it be America taking our independence from Britain or the folks of African descent fighting their way out of slavery, or hey, even gay and trans folks like me. And Leviticus and Deuteronomy? Some one is always trying to whip out that big old rule book to pop somebody else over the head.

But I’m going to direct you to everybody’s least favorite book of the Pentateuch, of the whole Bible even. The Book of Numbers. I know folks who have spent their entire lives studying the scriptures who avoid Numbers. Why? Because it can be powerfully, powerfully boring. It seems like nothing but W begot X begot Y begot Z begot and so and so on, right?

Turns out, No. There’s a story I want to point you to in Numbers chapter 27, verses 1 through 11. It’s a story about five women demanding their Rights.

Story goes that there was a man named Zelophehad who had five daughters, Mahlah, Noah, Hoglah, Milcah and Tirzah and no sons. He died. The Law of Moses, the Law of God said that his property was to go to his nearest male relative. His daughters were to get nothing. Nothing.

The daughters saw how unjust that was. They went before Moses, Eleazar the priest, the leaders, and all the congregation and they told them that The Law was unjust, that they deserved their inheritance. Why should their family lose everything just because of the lack of a male to inherit it?

What happens? Does one of the leaders call them greedy? Or immoral? Or uppity? No, Moses takes their case to God. And God takes up for them. The Lord says, Those women are right. And The Law gets changed.

You see, The Law isn’t right because it’s The Law. The Law is only right so long as it is just. If The Law is being used to defend injustice, The Law is wrong and God wants it changed.

The man I believe is the Messiah, Jesus of Nazareth is recorded saying when someone asked him which was the most important commandment “You shall love the Lord you God with your whole heart, soul, and mind. This is the greatest and first commandment. And a second like the first, ’You shall love your neighbor as yourself.’ On these two commandments hang all the law and the prophets.”

Amendment One doesn’t work with the commandments Jesus gave us. It just exists to harm folks who aren’t hurting anyone, who are just living their lives as well as they can, just like everyone else.

I’m asking you to love your neighbor as yourself and vote against carving needless discrimination against your neighbor into our state’s constitution.

Sam Taylor served as a chaplain’s assistant in Iraq and is a graduate of UNC-Chapel Hill.http://www.chapelhillnews.com/2012/04/24/71062/lets-talk-about-the-law.html

Posted by Cameron Partridge at 11:25 PM