Light Shining in the Darkness: Transgender Day of Remembrance in Boston 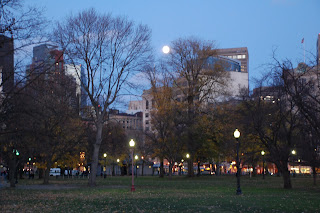 Early yesterday evening, as the nearly full moon rose above the Boston Common, my partner, our thirteen-month-old and I headed to dinner with a friend and then wandered around the corner for Transgender Day of Remembrance (TDOR). Upon arriving at the Cathedral Church of St. Paul, I was amazed at how many people were already there, even a half hour before the start of the event. Before the night was over, between 325-350 people would crowd into the space, including the balcony (and I got those numbers from the ultimate source, Jim Woodworth, one of the cathedral’s longtime sextons).

One of my favorite things about TDOR is the way it draws people together—I love touching base with people I haven’t seen in a while, and this year I was struck by the variety of contexts from which I knew people: from the Greater Boston trans community, current and former students, and Episcopalians from the Diocese of Massachusetts. In the latter category was the Reverend Stephanie Spellers, priest and lead organizer of the Crossing, and Penny Larson, drummer for the music team of the Crossing, which for the second year in a row hosted an open mic on Thursday for the local collaborative “Transcriptions.” Penny gave some very moving remarks later in the event, which are reposted below.

Also present at TDOR for the first time this year was my bishop, the Right Reverend M. Thomas Shaw III. He had just come from a eucharist celebrating the 100th anniversary of the clothing of the sisters of St. Anne-Bethany, and was present to deliver a welcome message.

When the MC for the evening, Mesma Belsare, called Bishop Shaw forward, I have to say my heart was absolutely pounding, and I found myself wondering why. I think it was because of the intense way my worlds were intersecting in that moment. And while TDOR was hosted by my congregation over the last two years, and I myself spoke in the slot that +Tom was now occupying, last night’s intersecting worlds felt more intense to me. This was probably because the event was unfolding in this same space in which I was ordained in 2004 and 2005-- actually, as I write this, I’m realizing that last night I was sitting just about where I sat and then stood during my ordination to the diaconate, which +Tom did. But mainly I think I was nervous because I know that members of the trans community have been hurt very badly by people of faith, and especially by churches—in the name of my God. And I was, I admit, concerned that Bishop Tom not say anything to exacerbate that hurt.

He started out by saying that before he welcomed everyone, he wanted to offer an apology. He wanted to apologize for the way in which Christians in particular have hurt transpeople, how Christians have, as he put it, “misrepresented God” to transpeople. Then he went on to reference the work of trans people in this diocese, at which point he referenced me and my colleague Chris, both of us transmen and priests here. I was very moved and humbled by what he had to say about us. He went on to say that both the church(es) and the world are made more whole by the full participation of transpeople in their midst and in their lives. He closed by saying it was therefore a particular honor for the Cathedral to host TDOR.

The applause for +Tom was sustained and, I sensed, at least from those sitting around me, that people were quite moved and perhaps even a little surprised by their positive response to +Tom’s remarks. Of course I can’t know how anyone other than myself, and those who later commented to me, felt—but that was the sense I got.

A number of speakers got up and spoke from their hearts throughout the event, ranging from transpeople to non-trans allies. There were people who spoke of having avoided coming to TDOR in the past because it was too scary, or felt too potentially victim-oriented to them, but who now felt differently. Particularly moving to me were the remarks of young people—one non-trans twelve-year-old spoke of one of her parents, a transwoman, and how lucky she felt to have her as a parent. Two young transmen spoke about the importance of reaching out to trans youth, and to watch especially closely for warning signs of suicidality. Two parents of a young man who died here in MA a few years ago spoke very movingly about their commitment to and love of the community. Several people spoke of people they knew who had taken their own lives, or attempted suicide, and several people came out as suicide survivors. In the wake of the intense reflection in this country about LGBT suicides this fall, this sequence of speakers gave a very important reminder that the T is very much part—indeed, likely even more at risk – of this wider pattern. But risk and loss were counterbalanced by resilience: people spoke of how they have reclaimed their lives, and of how important it is to protect and nurture one another’s unique humanity. One person spoke of this need with beautiful metaphors of light. 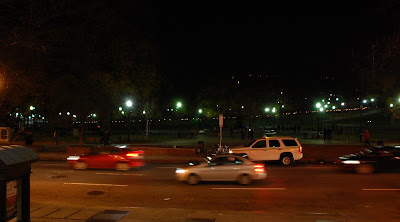 That image resonated yet more at the conclusion of the event, when the huge group split into two for the candlelight vigil. One group went across the Boston Common to the State House to read the names of the dead and then walked to the gazebo at another spot on the Common for a final gathering, while the other group went directly to the gazabo. As the groups left, my partner and I decided we needed to take our wiggly little guy home, so after chatting with other stragglers for a few minutes, we gathered our things together and made our way to the back of the cathedral. As we exited the swinging glass doors and stood with Jim out on the cathedral steps, we watched a long train of candlelight slowly make its way across the common, majestically moving from the State House to the gazebo. 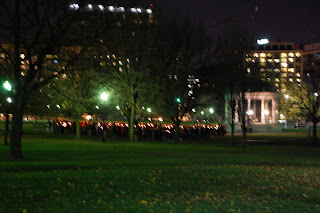 Penny Larson’s remarks, which are also posted at her blog are below:

Good evening. Thank you for coming, and welcome to my home.

I showed up on these steps four years ago, less than six months after my transition, and I was welcomed as an equal sister. I drum here, and I worship here. The Crossing community has prayed for me and laid hands on me during my process. They have marched with me and lobbied with me. This past Easter Bishop Shaw received me into the Episcopal Church as I delivered the sermon during the Cathedral’s Easter Vigil. I feel blessed and humbled to be a part of The Crossing community, and I am profoundly moved that my family is helping to host this Transgender Day of Remembrance.

As you know, this is a somber time, when we remember those that have been lost in the last year to violence. Sometimes the price is high when one lives an authentic life. There is fear, and misunderstanding, and hatred. Whatever the number of people we recognize this evening as lost during this last year, I suspect that the true number is higher. We simply are the victims of violence far more often than could be explained by mere random chance. We are targeted.

I have a dear friend who wonders why we do this every year, I believe she says something to the effect that we are celebrating our victim hood. And I admit that the heaviness of this day weighs upon me, even though this is only my fifth Transgender Day of Remembrance. It might be easier to just let this day slide by with barely a notice, to pretend that a day to remember our dead was unnecessary. But then the easy thing isn’t always the right thing. So while I’m very happy to have been involved with a special open mic night co-hosted by The Crossing and Transcriptions as part of Trans Awareness week, which was far more positive and celebratory, I think the importance of this night can not be overstated.

This past August, I volunteered at the inaugural season of Camp Aranu’tiq, a camp specifically for trans and gender-variant kids between the ages of 8-15. I got pretty attached to those kids, and I’m sure I’ll be back next year. Those kids were amazing, and it was a joy to be around them. This is our next generation. Many of them were experiencing the thrill of being themselves for the very first time at camp. Those kids just want to live happy lives being the people they truly are.

But the reality is stark. And the world that exists presents all sorts of difficulties for those who are perceived as different from some arbitrary standard. I want the world that those kids grow into to be so much closer to perfect than the world I grew up in, and yes, even the world as it stands now. I want those kids to grow into a world where they won’t have to go to a camp to be met with unconditional understanding and acceptance. My mother, when I was very little, taught me to always know that I am no better than anyone else, and I am no worse. I believe that we can all live together, celebrating each others similarities while basking in our uniqueness.

Thank you for joining us!
Posted by Cameron Partridge at 3:19 PM

I loved this post. I attended TDOR ceremonies here in NYC and was moved by the many people who came (150-200). I come to remember those who were lost to violence. I also come to show that I am not fearful or feel like I am a victim. i refuse to bow down to fear and intimidation.

I loved this post. I attended TDOR ceremonies here in NYC and was moved by the many people who came (150-200). I come to remember those who were lost to violence.میثم ابراهیمی

علی خدابنده
I also come to show that I am not fearful or feel like I am a victim. i refuse to bow down to fear and intimidation.