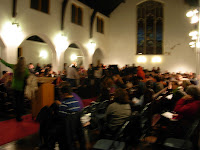 Last Thursday, November 20th, my parish, St. Luke’s and St. Margaret’s Episcopal Church (or ‘SLAM,’ as it is affectionately known) hosted Boston’s Transgender Day of Remembrance (TDOR). For coverage of the event by the Allston/Brighton Tab, click here, and for coverage by Bay Windows, click here. Bay Windows photographer Marilyn Humphries took some wonderful photos, which you can view here.

I can’t express strongly enough how proud I am that we hosted this event. As a member of the trans community, I’ve been attending TDOR for several years in other locations. The event’s origins also emerge out of the two metro areas that I have called home: Boston and the San Francisco Bay Area. TDOR was started nine years ago by San Francisco trans activist and writer, Gwen Smith, to mark the one-year anniversary of the murder of transwoman Rita Hester. Hester, meanwhile, had been murdered in the Boston area on November 28, 1998. And, in a realization that sent chills down my spine, she was murdered only blocks from my parish, in Allston, MA. When I first came to SLAM as their priest in 2006, I had not quite made this connection between my parish’s neighborhood and this event that has become a catalyst for transgender activism around the world. But as the ten-year anniversary of Rita Hester’s murder approached, the realization hit me like a ton of bricks.

Personally speaking, part of the gravitas I was overwhelmed by was the intersection of my worlds. I came to SLAM as an openly transgender man as well as an Episcopal priest, and while I don’t tend to overly compartmentalize my life, these facets of myself have never before been so simultaneously, fully present. The event M.C., Judah Dorrington, put it best in inviting all those gathered to allow all of themselves to be present that evening.

It was a night more evocative of January than November, hovering in the mid-twenties, but the chill couldn’t keep people away. From 6 p.m. on, people kept filing into the church. We had set up extra chairs, enough for about 175, but by start time, we were beyond capacity. People were standing in the aisles, sitting on the floor, piled toward the back. Without a doubt, I have never seen so many people in my parish — certainly over 200 -- and I wonder when the numbers have been matched in parish history.

As the event began, with Judah singing Marvin Gay’s “What’s Going On,” I wondered if I would be able to speak without loosing it, being one of several slated speakers. I had something brief written out, but when I stood up and really took in the sight of all those people, I decided to just go with the flow. I talked about how proud I and the parish was to be hosting the event. I reflected on how Judah’s exhortation to bring all of ourselves to the evening’s event rang more clearly for me that night than ever before. I talked about how pervasive and psychically pernicious anti-trans violence can be. And I recalled when I first really became aware of that culture of violence.

My partner and I had moved to Boston the summer of 1995, unaware that transwoman Debra Forte had been killed three months before. That fall, as I began my Master of Divinity Degree, I became an intern at the Fenway Community Health Center’s Victim Recovery Program. Part of my duties involved being a Victim Advocate, at the other end of one of the phones when someone called to report an instance of anti-lgbt or same-sex domestic violence. Then Channelle Pickett was murdered. I remember it particularly clearly, not only because I was interning at the VRP at the time, but also because she died on my birthday, November 20. It was overwhelming and horrifying to be at the nerve center of the LGBT community response to an anti-trans murder just as I myself was beginning to grapple with my own gender identity.

When Rita Hester died in 1998, I had graduated from divinity school. I was a new postulant in the ordination process in the diocese of Massachusetts, and was working full time in homeless services. In the three years between these murders, my own gender quandary had begun to feel like a shadow; I knew ducking from it was ridiculous but I couldn’t help trying. By November, this escapist strategy was beginning to wear thin, but not enough to change course. That’s probably why I didn’t attend the rally in Allston that year. I wish I could say otherwise.

I also have found, over the years, that going to a TDOR not only requires confronting the death of Rita, Channelle, Debra and way too many other community members. It also calls upon us to confront the myriad other losses that we undergo, past, present, and sometimes worst of all, potential/future. We can’t help but be reminded of our vulnerability.

And yet, ten years later, we have come so far, far enough to transform our future with hope. Numerous speakers echoed that truth, particularly Diego Sanchez, who reminded us all that we are not victims but victors. Ten years ago, the tasks that lay before us appeared like a mountain we had barely begun to climb. Now we are halfway up that mountain. Of course, I don’t know how big the mountain truly is. But I do know that we have made huge strides and that as we continue our ascent, our resolve and solidarity will need to keep growing. As the Rev. Kim K. Harvey of Arlington Street Church put it (and I paraphrase), regardless of our differences of belie 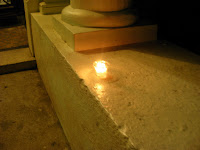 f and identity, regardless of our losses and grief over them, we can and we must claim a shared vision.

After the speakers, everyone filed out of the church with candles, making our way down Brighton Avenue with a police escort, to Union Square. We made a huge circle in front of the Jackson Mann School and read the names of the dead. The list comprised transpeople who died around the world this year plus those who have been killed in MA in any year, for a total of forty-eight names. From the school, we walked to the side street on which Rita Hester lived. Quietly, we stood outside her apartment building and held a moment of silence. A small, single candle was placed outside the door. Then we returned to the church for hot drinks and refreshments.

Though their tone certainly couldn’t derail the spirit of the evening, we were confronted by hecklers, both on Hester’s side street, and as we passed the Brighton Avenue bars on the way back to the church.

But what struck me repeatedly throughout the evening was a strong feeling of community solidarity and determination. I was so moved to meet a number of parents, friends, and other allies of the trans community—it felt like there was a larger than number of allies at TDOR this year than in years past, which strikes me as especially important. In one case, parents introduced me to their son, the mother explaining to me that she was using his chosen name for the very first time in that moment. I met other young people, some still in high school, just coming out. I talked with veterans of the Boston trans community, some of whom I have seen around but never officially met. I also enjoyed getting to catch up with old friends. And I was moved as I talked with several people about our various faith traditions and the challenges of being trans people of faith.

For me, there was something truly cosmic and transformative about Thursday night. By being present at that particular time, and in that particular place, we were able to be present to a horror, and, as several people put it, to re-member the humanity of those we have lost. In that process, and in that movement — in our words at the initial gathering, our walking and reading of names, our marking of Rita’s home, and our return for warmth and conversation -- we seemed to take on a new resolve, to claim even more strongly, our own humanity.
Posted by Cameron Partridge at 3:12 PM

Highly vigorous blog, I liked that much.
look at more info