The age old question: Who Am I?

This is my first post here at our blog, and so, before I begin in earnest, I would like to welcome our many varied readers. I would also like to take a quick moment to give major kudos and kewpie dolls to Shel, who has done (singlehandedly) a wonderful job with the creation of this blog.

We within TransEpiscopal have discussed privately the thought that perhaps we should share some of our stories. The Accidental Eremite has recently done something of the sort by discussing religious vocations within the church, while dealing with being transgendered. Since the time seems ripe, I shall relay some of my thoughts.

The vast majority of the human race never question their gender. The thought of questioning whether one is male or female is as foreign to the general populace as seeing someone with polyploidy (having a sixth finger or toe). In my experience, the responses I have received from telling someone I am trans usually involve a display of disbelief bordering on the obscene. I might as well grow a third eye, or perhaps a tail, which sadly might be met with more understanding. It leaves me with the thought that the public is in dire need of education: What is this, being 'transgendered'? 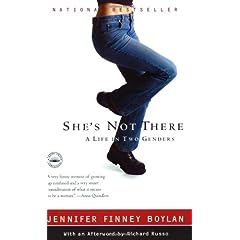 I can not answer that question for anyone else, only me. There are thousands of differing definitions for transgender. As with all biological entities, I am unique, and thus my definition, the one that describes me, is likewise unique. Sure, much of what I have experienced is paralleled by many others, and I can point you in the direction of two different books that may shed light on those experiences: a memoir by Jennifer Finney Boylan entitled "She's Not There" or the more clinical text by Brown and Rounsley, "True Selves". Boylan's stories of her life pre-transition ring especially accurate to my ears. I cried through out that text, and felt as though she was telling my story. You see, I am a MtF (male-to-female) transgendered person, but I have not transitioned. Yet. Perhaps I won't, though I believe it to be more a 'when' than an 'if'.

So when did I know? I knew I was different in kindergarten. I wanted to be a woman, to grow up and have babies. Small problem: I am biologically male. I didn't admit that I might be trans though until December 28, 2005, when after a long heart to heart with my beloved wife, I admitted that I had issues with who I was gender-wise.

I began crossdressing, wearing my mother's clothes, in kindergarten. I have been doing it ever since. Like most of my trans-sisters, I tried to hide this aspect of myself out of shame and guilt. I went through periods of accumulation, where I horded women's clothing like a raccoon with shiny objects. Then after a short time, I would convince myself I was crazy, that 'normal' people don't do this sort of thing, that I am a male and I should just admit it, accept it and live it, and throw out (we call it purge) all of my accumulated clothes. During these times I subscribed to the "out of sight, out of mind" philosophy. This cycle continued through high school and college, extending into my marriage.

This inability to accept myself led me down a very dark path. A spiraling depression, one that left me near suicidal for years. I hated myself. I knew I wasn't truly male, yet every time I looked in the mirror, a relatively handsome young man gazed back. I developed survival mechanisms, the most successful of which was diving into work. I am a work-a-holic, and have always been so. Another tactic was to merely act - I developed an outward personality I could 'turn on' that lived up to societal expectations, based on the outward appearance observed by society, i.e., people saw a young man, so I acted like a young man. This did not always work however, but for the most part it allowed me to be left alone by the rest of the world.

NOTE: I am happy to say that once I began to truly accept who I was, the depression has more or less been alleviated. Still, I have my days when my GID (clinical term: Gender Identity Dysphoria) overloads me, blinds me, causing me to do little else but try to maintain an outward image of calm. Back to the story...

Like many of my trans brothers and sisters, I felt that if I assimilated into society, fulfilling the norms expected of someone with my outward personality and gender, I could just fit in and live a 'normal' life. I also believed, romantically, that love conquered all. Not merely all, but me. My GID. I truly believed that by falling in love, and marrying the love of my life, I would be cured. Boy was I wrong. But I married a wonderful woman. We have two beautiful children. From the outside looking in, we might be the perfect family. Just don't look in too closely as you might wonder who is wearing the pants (I'll give you a hint...) From the inside, during the first 6 years of our marriage I felt I was living a lie: ashamed and guilty I was hiding from my wife my accumulation and purge cycles; worried that if I were to get caught, we would lose our idyllic life, and that my being a freak was the cause of it all.

Once I came out to her, that dark December night, I was still in denial. I thought perhaps I was just a crossdresser... I wanted the easy out, the path that would cause the least disruption to our life. But I knew even then there was more to it. It took another 3 months before I admitted I was trans, that I wanted to transition. The admission was the first of many steps toward self acceptance. My wife and I have grown more in the last year than we have in the previous 6 years, both as a couple and as individuals.

I could continue, but this is feeling like a novella. More to come. Instead I leave you with an excerpt from "She's Not There":

I did not know the word transsexual back then, and the word transgendered had not yet been invented. I had heard the word transvestite, of course, but it didn’t seem to apply to me. It sounded kind of creepy, like some kind of centipede or grub. In my mind I sometimes confused it with the words that described cave formations: What was it again--transves-tites grew down from the top of the cave; transves-mites grew up from the bottom?

But even if I had known the right definitions for these words, I am not sure it would have made much difference to me. Even now, a discussion of transgendered people frequently resembles nothing so much as a conversation about aliens. Do you think there really are transgendered people? Has the government known about them for years, and is keeping the whole business secret? Where do they come from, and what do they want? Have they been secretly living among us for years?

Although my understanding of the difference between men and women evolved as I grew older, as I child I knew enough about my condition to know it was something I’d better keep private. This conviction had nothing to do with a desire to be feminine; but it had everything to do with being female. Which is an odd belief, for a person born male. It certainly had nothing to do with whether I was attracted to girls or boys. This last point was the one that, years later, would most frequently elude people. But being gay or lesbian is about sexual orientation. Being transgendered is about identity.

What it’s also emphatically not, is a “lifestyle,” any more than being male or female is a lifestyle. When I imagine a person with a lifestyle, I see a millionaire playboy named Chip who likes to race yachts to Bimini, or an accountant, perhaps, who dresses up in a suit of armor on the weekends.

Being transgendered isn’t like that. Gender is many things, but one thing it is surely not is a hobby. Being female is not something you do because it’s clever, or postmodern, or because you’re a deluded, deranged narcissist.

In the end, what is, more than anything else, is a fact. It is the dilemma of the transsexual, though, that it is a fact that cannot possibly be understood without imagination.

After I grew up and became female, people would often ask me—how did you know, when you were a child? How is it possible that you could believe, with such heartbroken conviction, something which, on the surface of it, seems so stupid? This question always baffled me, as I could hardly imagine what it was like not to know what your gender was. It seemed obvious to me that this was something you understood intuitively, not on the basis of what was between your legs, but because of what you felt in your heart. Remember when you woke up this morning--I’d say to my female friends—and you knew you were female? That’s how I felt. That’s how I knew.

Of course knowing with such absolute certainty something that appeared to be both absurd and untrue made me, as we said in Pennsylvania, kind of mental. It was an absurdity I carried everywhere, a crushing burden, which was, simultaneously, invisible. Trying to make the best of things, trying to snap out of it, didn’t help either. As time went on, that burden only grew heavier, and heavier, and heavier.